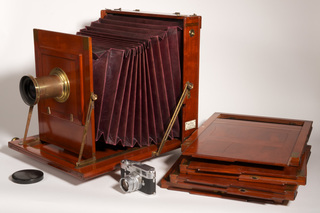 This is the start of a series about restoring and photographing with a nineteenth-century stand camera - and the outcomes of the experience. The story began in 2010 when I was given a 15” x 12” Victorian camera, with the words “who knows, you might be able to get it working again.”  It was a generous gift and I had admired the camera from a distance for years. Beautifully made from polished mahogany, brass and maroon leather the camera reminded me of Lewis Carroll’s Hiawatha’s Photographing:

From his shoulder Hiawatha

Took the camera of rosewood

Made of sliding, folding rosewood;

Neatly put it all together,

In its case it lay compactly,

Folded into nearly nothing;

But he opened out the hinges,

Pushed and pulled the joints and hinges,

Till it looked all squares and oblongs

In the second book of Euclid.

Only at this stage my camera did not have a case. It did have a maker’s plate, announcing it was  ‘The British’ made by J. T. Chapman. Searching the web produced more information than I expected. J. T. Chapman (1843-1907) was a Manchester-based photographic chemist who, in the 1870s, developed new formulae for producing reliable gelatino-bromide dry plates. He also designed and sold cameras, starting with the quarter-plate Manchester camera in 1883 followed by the ‘British’ range in 1886: my 15 x 12” was the largest in the range. Seen next to an M3 Leica, it makes the 35mm camera look like a miniature or toy. 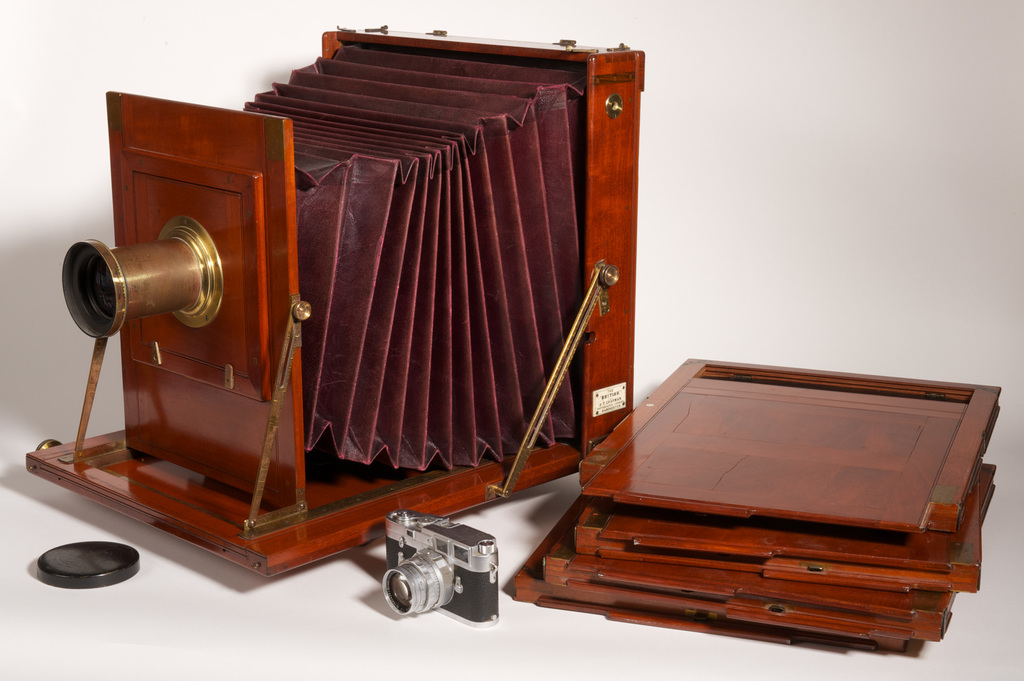 Then I found that the Manchester Museum of Scientific Instruments also owns a 15 x 12” Chapman ‘British’ which had belonged to James Mudd who, with his assistant George Grundy, used it to photograph railway engines built by the Beyer Peacock works in Manchester. The Museum’s camera looked identical to mine except that a second tripod bush has been fitted to the base plate (which had split badly around the original bush) and was missing its lens, dark slides and ground glass focussing screen. The focussing screen on my camera had a series of diagonals and square guidelines drawn in pencil, marked ‘engine’ and ‘engine and tender’. I was a safe bet that it too had belonged to Mudd and/or Grundy. 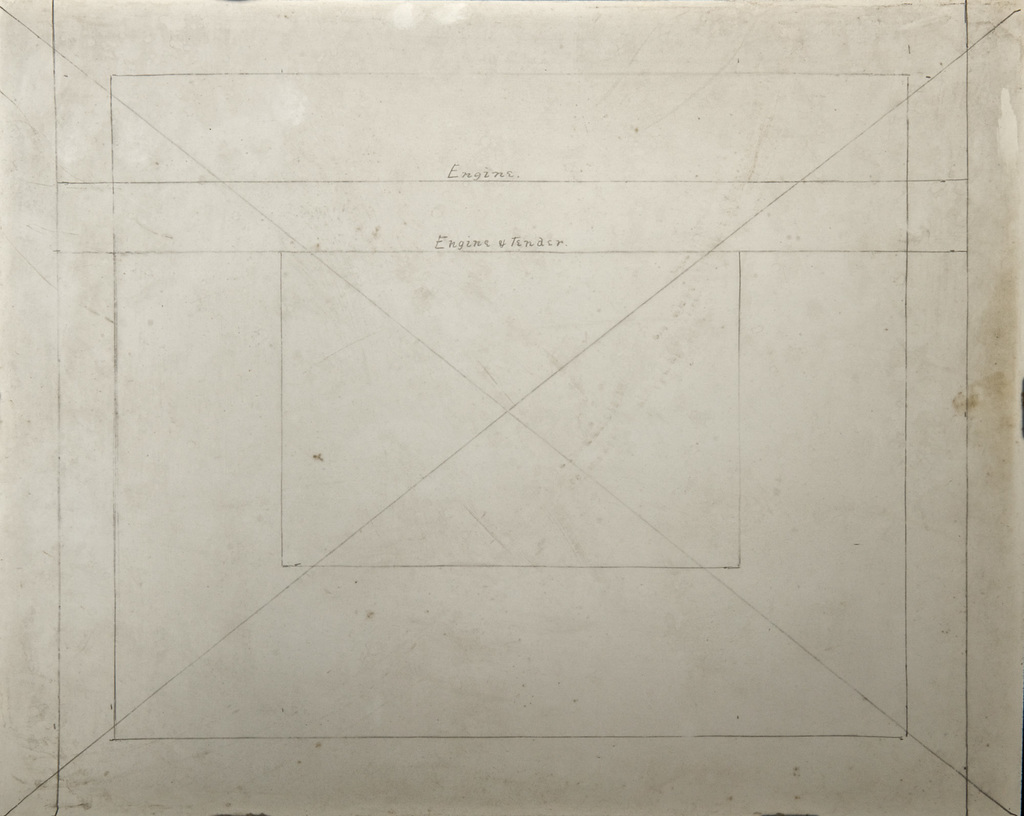 The ‘British’ was well-suited to making large, highly detailed plates of industrial machinery. The front lens panel allows forward and backward tilt and vertical shift, but no lateral shift and no swing; the camera back allows forward and backward tilt, but no swing or shift, and can be fixed in either ‘landscape’ or ‘portrait’ orientation. It is a fine example of Victorian design and craftsmanship: the camera body is surprisingly light for such a large object.

My camera came with its lens and lens cap, three double dark slides and a single wet-plate holder. The lens is a Dallmeyer Rapid Rectilinear, serial number 24042, which was logged in the Dallmeyer stock book on 27 May 1875. It has an equivalent focal length about 450 mm and a very fine iris diaphragm marked with f-stops from f8 for f32, alongside Dallmeyer's own system of diaphragm numbers.

Made to fit the individual camera, the double-sided ‘book slides’ open with a hinge and are designed to take two glass plates, separated by a sheet metal spacer with springs to keep the plates seated in place. Like the camera body, the slides are made of mahogany with brass fittings and ebony inlays to reinforce the corners. Signs of wear and tear showed that the double dark slides had been heavily used, but the wet-plate holder was virgin. 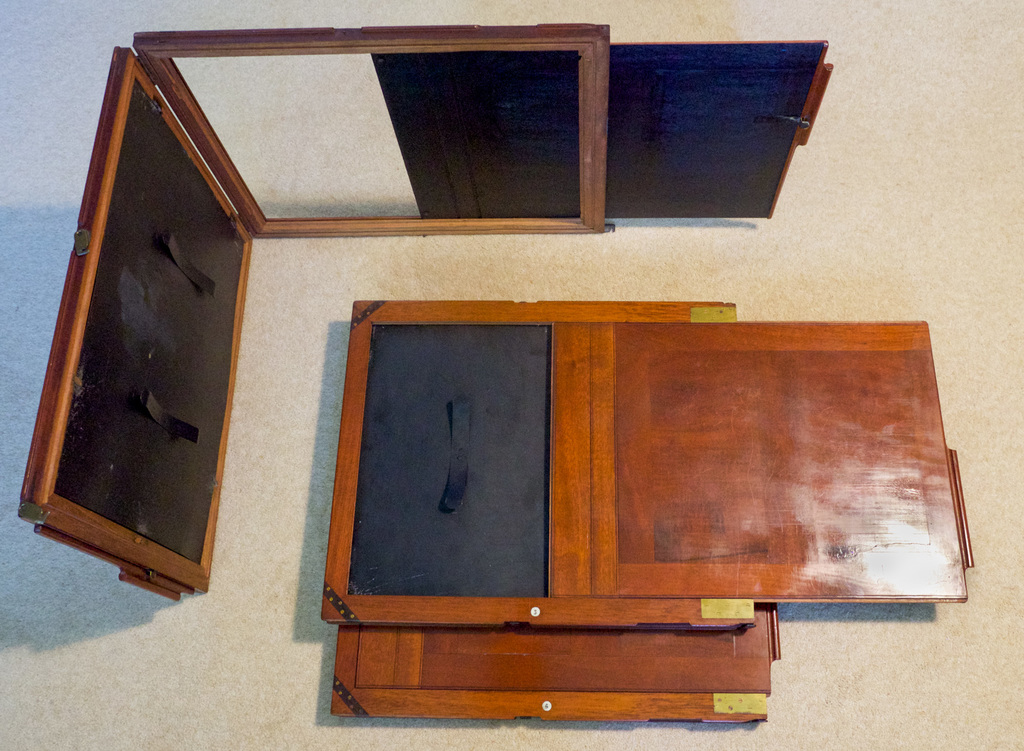 If your interested here some links to two I've owned. I still use the Thornton Pickard one. The Billcliff (who made cameras for Chapman) has gone to live with another photographer. I look forward to seeing further posts on your progress with it.