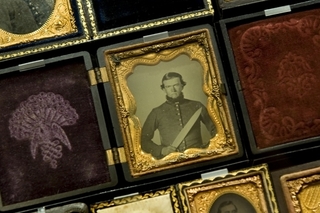 To coincide with the start of America's observance of the sesquicentennial of the Civil War, which began 150 years ago on 12th April, a new exhibition featuring 400 haunting images will be held at the Jefferson Building, Library of Congress. Entitled “The Last Full Measure: Civil War Photographs from the Liljenquist Family Collection,” these are striking images, especially of young enlisted men. They often show weapons, hats, canteens, musical instruments, painted backdrops, and other details that enhance the research value of the collection. Among the most rare images are sailors, African Americans in uniform, a Lincoln campaign button, and portraits of soldiers with their families and friends.

The pictures are from the collection of the McLean jeweler Tom Liljenquist and his sons, who donated 700 glass ambrotypes and metal tintypes to the library last year. The family has been collecting the photographs for 15 years. Most of the photographs are small, some not much bigger than a pack of matches. They are arranged in neat rows inside glass cases in a way that almost gives the effect of a quilt. The library is also setting up two interactive stations at the exhibit where the pictures can be uploaded onto a computer screen and then enlarged to reveal the most minute details.

Details of this collection can be found here, and of this forthcoming exhibition here.