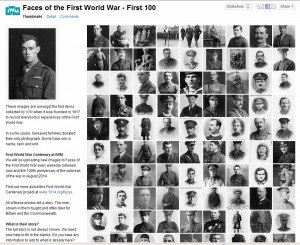 To mark Amistice Day today, the Imperial War Museum has uploaded made than 100 previously unseen portraits of those who served in the First World War publically for the first time on Flickr Commons. Taken from the Museum’s ‘Bond of Sacrifice’ which is an archive of photographs collected by the IWM between 1917 and 1920, all of the photos tell a story. The men shown in them fought – and often died – for Britain and the Commonwealth during the First World War.

Some background information is available here, and to view the site, click on the link here.