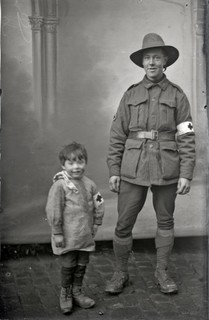 As update to an earlier BPH post here: 800 of the 4500 delicate glass plate negatives, located by a media team from the Seven network and purchased by Seven boss Kerry Stokes, have today been donated to the Australian War Memorial. They will form the basis of a new exhibition that opens on November 2.

Apparently about 3,000 of those plates are of British troops, as well as some Gurkhas, Indians, American and Chinese labourers. The future of these is still being determined.

These plates form part of the Louis and Antoinette Thuillier Collection uncovered in 2011 after sitting undisturbed for nearly a century in the attic of a farmhouse in the French town of Vignacourt. These glass-plate negatives feature Australian soldiers in informal settings. The discovery of these photographs represents one of the most important recent finds of material from the First World War. The donation is among the most significant to have been made to a cultural institution.

The Memorial has been working hard behind the scenes in preparation for the arrival of the Lost Diggers photograph collection. The collection of glass plate negatives provides a significant insight into the lives of troops in France while on rest from the front line.

Planned for November 2012, and followed by a national tour, the exhibition ‘Remember Me: the lost diggers of Vignacourt’ will showcase a selection of photographs from the large collection, along with stories and items from some of the men themselves. Whilst the photographs in the collection are largely unidentified the Memorial, and Channel Seven, have been busy researching and working closely with the public to shed light on who some of these men might be, and what their stories might reveal.

Currently, you can see the Lost Diggers photos on the Channel Seven Facebook page or on the Sunday Night program website.

Photo: An unknown soldier with Robert Thuillier, the photographer's son.