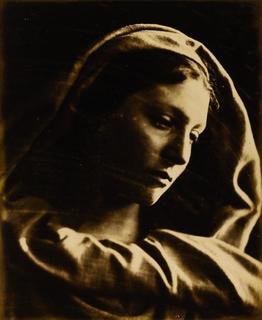 The album - known as The Valentine Prinsep Album -  of 32 large scale portrait photographs - containing images of leading Victorian celebrities and two unrecorded photographs - represents a major addition to Cameron’s oeuvre. Estimated at £250,000-350,000, it will be offered at Sotheby’s auction of English Literature, History, Children’s Books and Illustrations in London on 10 December 2013.

The sale will mark the first time in over thirty years that any album compiled by Julia Margaret Cameron containing her own photographs has appeared at auction. The "Signor 1857" Album, compiled by Cameron, but containing images taken by various other photographers, was sold for £121,250 at Sotheby’s London on 12 December 2012. It is currently the subject of an export licence deferral pending an attempt to secure it for a British institution.

Specially compiled by Julia Margaret Cameron for her godson and “illustrious” nephew the Pre-Raphaelite artist, Valentine Cameron Prinsep, on his 31st birthday in 1869, this highly-important album was completely unknown until it was discovered earlier this year. It is one of only eleven known albums compiled by Cameron with her own photographs, and represents hours of meticulous work. The album contains carefully chosen portraits of her friends and family including leading figures in Victorian society such as Alfred Lord Tennyson, Sir John Herschel and her goddaughter Julia Jackson (the mother of Virginia Woolf). While several of the images are known in only a handful of other prints, two others are previously unrecorded and possibly unique. The two unseen pictures both depict Mary Hillier, the daughter of a local shoemaker and Cameron’s personal maid. 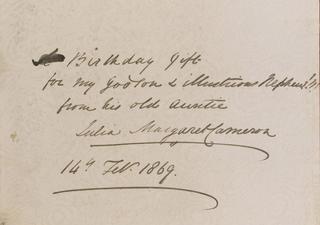 Top: Mary Hillier (1867). The daughter of a local shoemaker and Cameron’s personal maid. Middle:Sir John Herschel (1867).Secretary of the Royal Society and first president of the Royal Astronomical Society before the age of 40. Lower:  The dedication: A birthday gift to my godson & illustrious nephew!!! From his old auntie Julia Margaret Cameron 14th Feb. 1869