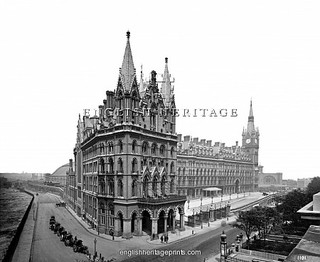 One of London's most iconic landmark - the St Pancras Renaissance Hotel - or formerly better known as The Midland Grand Hotel was the last and most extravagant of the great Victorian railway hotels, costing 14 times more than its nearby rival the Great Northern. It opened when the railway boom was turning to bust, the 19th century's equivalent of the bursting of the dotcom bubble.

This and other buildings (including country houses, factories, hospitals, shops, banks, railway stations, cruise liners) were photographed then mainly by Bedford Lemere & Co, the pre-eminent English firm of architectural photographers during the late 19th and early 20th centuries. Today the Bedford Lemere collection, held by the National Monuments Record, is an important source of images of English architecture and life from 1870 until the Second World War. You can view the online collection here, or better still head to a new V&A exhibition this summer.

Curated by Anne Woodward and Gary Woodward from English Heritage, it will explore Bedford Lemere & Co's extraordinary client list, the evolving role of commercial photography and the lasting social significance of the images. The high quality photographs offer a rare glimpse at late Victorian interiors such as Heal & Son showrooms in 1897, the bar at the North Eastern Station Hotel in 1893 and a host of other 'new' interiors and exteriors.

Accompanying the exhibition, English Heritage is publishing the book The Photography of Bedford Lemere & Co. by Nicholas Cooper. The book features over 250 striking photographs from the collection. Printed from the original negatives they include stunning images. Especially evocative are the firm's photographs of those - mostly women, old men and children - involved in war work at home in England between 1914 and 1918.
You can search for the book via the Amazon link on the right, and details of the exhibition can be found here.
Photo: St Pancras Hotel (or Midland Grand Hotel) by Harry Bedford Lemere after 1874. Copyright © English Heritage