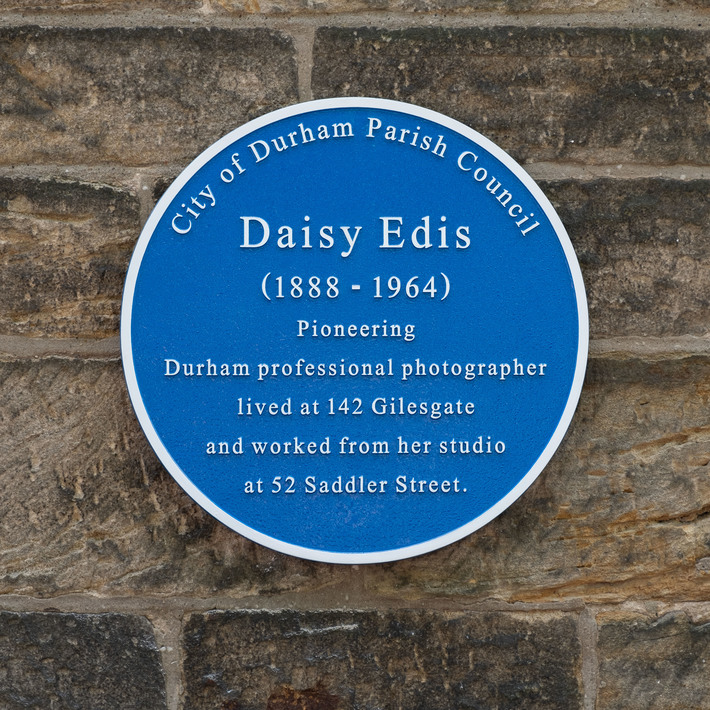 A commemorative blue plaque in honour of photographer and business woman Daisy Edis has been unveiled at her former home at The Green, Gilesgate, Durham. It was unveiled by her grandson George Spence.

Daisy Edis (1887 (sic) - 1964) built up the photographic and studio business founded by her father John R Edis in Durham and earned national and international recognition. She was also one of the founding members of the re-formed Durham Photographic Society in the late 1940s. She was a member of the Royal Photographic Society from 1933 and gained her Associate the same year and Fellowship in 1935. She remained a member until her death. She was also a Fellow of the Institute of British Photographer. Edis started working in photography aged 15 years.

The City of Durham Parish Council authorised and organised the ceremony. 'ne of the event organisers, Dr Lucy Szablewska, said that Daisy's plaque was one of a number of initiatives across Co Durham to honour more women with blue plaques. Carl McSorley who runs the replica Edis photo shop and studio at the Beamish Open Air museum attended, formally dressed in bowler hat and vintage suit for the occasion.

Daisy’s father John R Edis founded the highly succesful photographic business in Durham, in the late 19th century. After his death daughter Daisy carried on the business, expanding its range of activities, including work, some of it highly technical, for Durham University. Although Daisy was married as a young woman and became Mrs Spence sadly her husband died after a few years and Daisy continued to use her maiden name of Edis by which she was well known.

According to the RPS's Photographic Journal (June1964) Edis specialised in portraiture and was well-known for her work with the cathedral, university and school in Durham. She was one of the last users of the platinum process and her work was widely shown in Britain Europe, Australia,Japan and the United States.

With thanks to Lucy Szablewska

Any relationship to Sir Robert Edis and his family, many of whom, like Mary Olive Edis, were important to the field of photography?

I think pioneer in the sense of being a woman.

Surely the pioneer was her father, John, who isn’t mentioned on this new plaque. Is there a separate plaque for him?