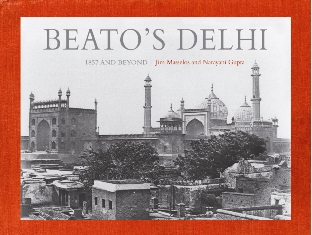 Beato’s Delhi offers a pictorial history of Delhi, brought vividly to life through the visual virtuosity of Felice A. Beato, the famous nineteenth-century photographer who came to India to record the last embers of the 1857 ‘Mutiny’, and Jim Masselos who, in 1997, retraced Beato’s footsteps and photographed the same sites as far as possible.
By the time Beato reached Delhi in January 1858, the British had already subdued the city, so he could not record the military campaign itself. However, his lens was perhaps the first to capture the battleground and other places of note in that campaign, providing for posterity some unique views of Old Delhi before substantial parts of it were demolished in the aftermath of 1857, or radically redeveloped as the years progressed.
Beato’s luminous views are juxtaposed with the author's present-day photographs of the bustling metropolis, shedding light on how the face of Delhi has transformed in the intervening 154 years. Supplemented with an illuminating text by Masselos and Narayani Gupta, Beato’s Delhi is a moving testament to the resilience of this ever-evolving city.

Author Bio: Jim Masselos is an honorary reader in history at the University of Sydney. He has written extensively on Indian history and culture, including aspects of the history of Bombay. Narayani Gupta has been a consultant with INTACH, after she retired as professor of history at Jamia Millia Islamia, New Delhi.

The BBC website has today featured some images from this publication, which can be found here.

Yes, I believe so, but it's a 2011 publication. If you are still keen, copies can be bought here.

Is this a reprint of Delhi 2000 edition, that was sold out?