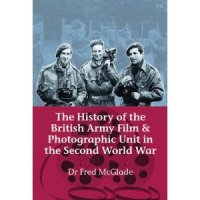 At the beginning of the Second World War the Nazi hierarchy had, at an early stage, fully recognised the importance of controlling the depiction of military conflict in order to ensure the continued morale of their combat troops by providing a bridge between the soldiers and their families. Promoting the use of photographic record also allowed the Nazis to exercise control over negative depictions of the war.

In contrast, the British military and political decision makers were reluctance to embrace any potential propaganda benefits of film and photographic material in the build up to and the early months of the Second World War. Military commanders in the field were conscious that their tactical blunders could be recorded on film and still photographs and made available to the British public. Visions such as the First World War use of troops as fodder for machine guns and the ensuing mud-coated corpses of British troops were not the sort of record of the conflict that British generals in the field were willing to contemplate. British politicians and their generals feared that a realistic presentation of the horror of war could have an adverse effect on recruiting. However, pressure was to come from across the Atlantic where the refusal to allow reporting of the war was harming Britain's cause in the United States and British diplomats overseas reported that the Germans were winning the propaganda war throughout the unoccupied countries of Europe.

This belated acceptance of the need for open reporting of the conflict meant that when it was finally accepted as useful the P.R.2 Section (Public Relations) at the War Office and the British Military found itself in a 'catch up' situation.

Despite the disadvantages of such a slow start, the British combat cameramen grew in strength throughout the conflict, producing films such as Desert Victory, Tunisian Victory, Burma Victory, The True Glory and a huge stock of both cine and still material lodged as 'Crown Property' in the Imperial War Museum, London.

The British Army Film and Photographic Unit's material represents some of the most frequently used records of historical events and key figures of the period. It is utilized by film producers and television programme makers without the cameramen who shot the footage being listed in programme credits.

This book does not seek to denigrate the work of others such as Accredited War Correspondents but it does seek to accord to the combat cameramen of the A.F.P.U. the recognition they are entitled to, but have never received, for their enormous and unique contribution to the historical record of the Second World War. Based on memoirs, personal letters and interviews with the AFPU cameramen, this book reveals the development of the unit and tells the human story of men who used cameras as weapons of war.

Published by Helion & Co, and written by  Fred McGlade, the book can be found by using the Amazon link on the right.