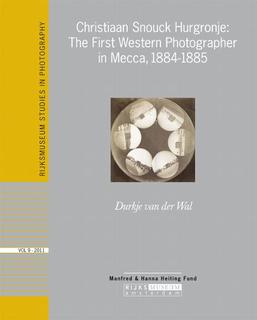 The Islamic scholar Hurgronje was the first westerner to capture images in this ‘forbidden city’. He did so by converting to Islam so that he could take part in the Hajj. He became world famous the moment his books of photographs were published. Now, for the first time, we learn about the obstacles that Snouck Hurgronje had to overcome in order to obtain his photographs. He took those in his first book himself, while the second is filled with photographs by his assistant, the Meccan doctor ‘Abd al-Ghaffar. His share in Snouck Hurgronje’s books and their remarkable collaboration have never been studied before. One of the high points is an exceptional circular, six-shot photograph taken with a homemade ‘detective camera’. It was made with the ‘revolver method’ of a rotating glass plate that enabled six photographs to be taken in succession without changing the plate.

You can try searching for the book through the Amazon link on the right, or direct from the Museum here.