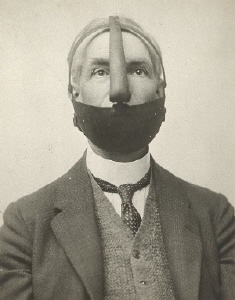 Braintree District Museum traces its origins to a Museum room in the Town Hall that opened in 1928 to display the collections of Alfred Hills, a local clerk and historian and the Courtauld family. After a succession of different homes, today's Museum opened in the former Manor Street School on 6th October 1993. Since then the collections expanded from boundaries of Braintree and Bocking to the whole of the District of Braintree.
Current collecting strengths include: archaeology, ceramics, local history, photographs and textiles. The  Museum possesses a large and important collection comprising snapshots of the District's people and places from the 1880s to the present day.

Photo: A 'Scold's Bridle' being modelled by Alfred Hills.