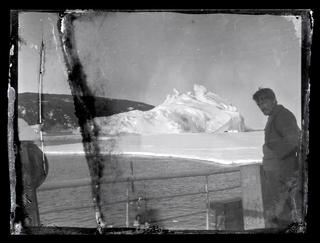 The Trust’s conservation specialists discovered the clumped together cellulose nitrate negatives in a small box as part of the Ross Sea Heritage Restoration Project which has seen more than 10,000 objects conserved at Scott’s Cape Evans hut.

The negatives were removed from Antarctica by the Trust earlier this year. Detailed conservation treatment back in New Zealand separating the negatives has revealed twenty-two images.  The photographs are from Ernest Shackleton’s 1914-1917 Ross Sea Party, which spent time living in Scott’s hut after being stranded on Ross Island when their ship blew out to sea.  One of the most striking images is of Ross Sea Party member Alexander Stevens, Shackleton’s Chief Scientist, standing on-board the Aurora.

Although many of the images are damaged, the Antarctic Heritage Trust was able to recognise landmarks around McMurdo Sound, although the identity of the photographer remains unknown. “It’s an exciting find and we are delighted to see them exposed after a century. It’s testament to the dedication and precision of our conservation teams’ efforts to save Scott’s Cape Evans hut,” said Nigel Watson, Antarctic Heritage Trust’s Executive Director.

In 2010 the Antarctic Heritage Trust (NZ) discovered three crates of whisky and two crates of brandy under Ernest Shackleton’s 1908 base during conservation work.