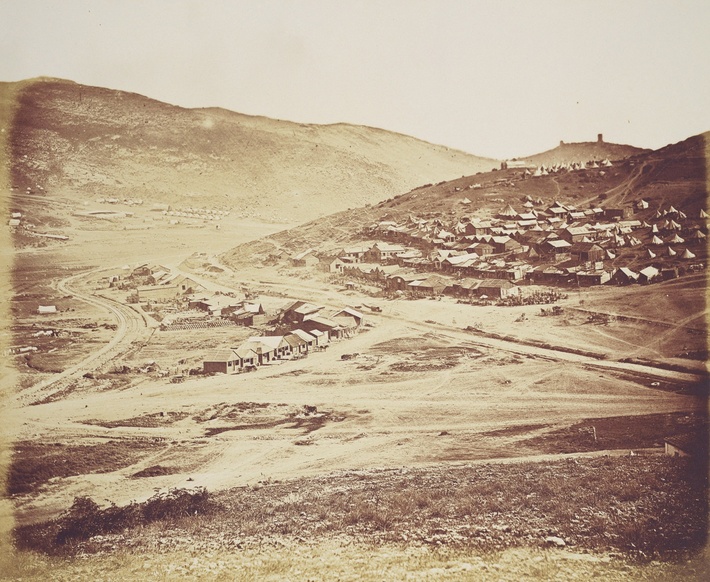 Over the years searching for online digital copies of images taken by the James Robertson/Felice Beato photographic team in the Crimea in 1855-56, I have come to the conclusion that there must be many in private collections that are not available to people like me who would find them useful historically. I first became aware of this when I found three under Item 10 on page 193 of Alastair Massie’s Crimean War book entitled A Most Desperate Undertaking. They were landscapes in a six- image panorama taken from the eastern slopes of Frenchman’s Hill near Kadikoi. While three of these images, which appear second, fourth and fifth in the panorama and have the titles in the Royal Collection Trust given as Russian Church, Kadikoi, Kadikoi (see top left) and Huts of the Royal Artillery respectively, are readily available, the other three that appear first, third and sixth are not. I do not even know the titles of these images. I learnt that the panorama had been auctioned many years ago and Alastair Massie, who worked for the National Army Museum in London, was given access to the panorama before sale by the auctioneers. Hence they were reproduced in his book, but only in virtually postage stamp size which does not allow a study of details.

Since then, I have come across a rare image by Robertson/Beato of the British cavalry camp west of Kadikoi (see below) that was being auctioned on ebay in 2019. I had not been aware of its existence until then. I was not the successful bidder.

This post is an appeal to those private collectors who have rare Crimean War photographs, which are valuable for historical research, to make high-definition digital copies available to specialists of the conflict like myself. I would most likely be able to give the owners details of their images that may be of great interest. I can be contacted at bananadoctor@msn.com.