Helmut Gernsheim (1913-1995) was one of the most influential figures in the history of photography. He was one of a handful of people whose original research, collecting and writing took the field seriously and changed the way it was regarded. His scholarly and encyclopaedic book, The History of Photography (1955), co-written with his wife Alison, became the authoritative source on the subject. Over the years, Gernsheim managed to assemble a peerless collection of works by leading British, French and German early photographers. These included important British images by Fox Talbot, including a copy of his work The Pencil of Nature, Hill and Adamson, Fenton, Cameron, Le Gray and Daguerre, all of which have since come to be regarded as masterpieces of the 19th century. One of his most sensational discoveries and acquisitions was of the earliest known photographic image, taken by Niepce in 1826.

This exciting and new exhibition at the Harry Ransom Centre, University of Texas scheduled for this coming fall/winter is made up of two complementary and interweaving narratives—the history of photography as told through the collection's imagery, and the history of the collection's formation and methodology. The Gernsheims Collection will be on display alongside works by unknown or lesser-known artists who used various means to improve or to exploit the relatively new invention of photography. The exhibition will highlight key moments in the history of photography, important technological and ideological shifts in the act of picture making, and narratives that served the Gernsheims as key points of collecting.

Further information will be provided in the 'Events' section of this blog as it becomes available. For those who can't quite make it to Texas, there is a fascinating on-line site (http://www.hrc.utexas.edu/exhibitions/permanent/wfp/) to view one of the Centre's most prominent permanent exhibiton i.e., the first photograph (View from the Window at Le Gras) by Frenchman Joseph Nicéphore Niépce - a great background read to the forthcoming NMeM's conference in October, as reported exclusively by the BPH blog creator. 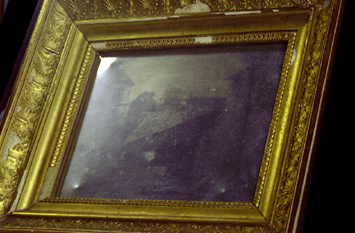 Photo: The First Photograph (View from the Window at Le Gras. ca1826, heliograph, in original frame, 25.8 x 29.0 cm) housed in its original presentational frame and sealed within an atmosphere of inert gas in an airtight steel and plexiglas storage frame, must be viewed under controlled lighting in order for its image to be visible.

Comment by Michael Wong on March 18, 2010 at 14:35
Footnote: When Gernsheim first started his collection back in the 1940s, he assembled some 6,000 photographs with virtually no outlay ! - a measure of the low regard in which photography was held at that time. His entire collection consisted of some 50,000 images, 3,000 books and albums and 300 pieces of equipment.

He spent considerable energy in the UK to encourage the establishment of a national or international collection of photography to which his collection would be the nucleus, and of which he would be the curator. He gained the support of a wide range of people, but was unable to persuade any of the British galleries or museums to accept his proposals. A public appeal on BBC television failed to get a response too.

Gernsheim's prime interest was in a permanent exhibition, to be drawn from his collection. His exhibition "Masterpieces of Victorian Photography" was seen to popular acclaim at the V&A Museum in 1951 as part of the centenary celebration of the Great Exhibition, and a later exhibition, "One Hundred Years of Photography", toured internationally. In 1964, after years of negotiation with organisations in the United States and on the Continent he finally sold his collection to the University of Texas at Austin, which established the Gernsheim Collection of Historic Photographs as a study centre. However, he passed his priceless Niépce items on to the University as he had received them, without valuation !

Although no price was disclosed, Mr. Gernsheim indicated he had received less than $500,000, enough to pay for his retirement in Switzerland, but, the collection's senior curator, Roy Flukinger, said that was only a small fraction of what it would have fetched a decade later when the market Mr. Gernsheim helped create came of age.