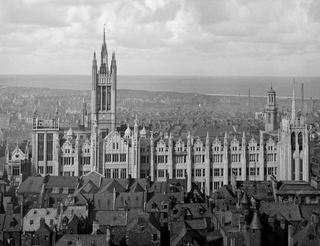 He may be best known as the guitarist for legendary band Queen but Brian May will visit Aberdeen in August to celebrate the work of another great who rose to fame thanks to a very different royal connection.

The musician and song writer will appear at the University of Aberdeen in his capacity as photographic historian and Director of The London Stereoscopic Company for the launch of a new book dedicated to Scotland’s great Victorian photographer George Washington Wilson, who hailed from the city, written by the aptly named Professor Roger Taylor. The university houses the GWW archive.

Wilson rose to fame after he was appointed to document the construction of Balmoral Castle and became Photographer to the Queen. His innovations in stereoscopic photography during the 1850s created some of the most captivating stereo (3-D) images of the Victorian period.

Wilson was a technical and aesthetic innovator and when he began taking two shots of a scene which when viewed together created a three-dimensional image, it quickly became a craze first in Britain and then across the world.

To view the images in their full glory, a special viewer is required and to mark the entry of LSC into book publishing, May created the OWL stereoscope.  This unique viewing device allows modern audiences to see the photographs in the same way as their Victorian counterparts and is included with every book.

May will join Professor Taylor for a celebration of the life of George Washington Wilson at the University of Aberdeen’s King’s College campus. It is a fitting venue for the event as the University holds some 38,000 of the estimated 40,000 glass plate images Wilson captured around the world during his prolific career.

The pair will trace Wilson’s career and show key examples of his work, as featured in the book, using a stunning new 3-D projection system. The audience will also be provided with the highest of quality 3-D glasses to enjoy the images as they were intended.

Professor Phil Hannaford, Interim Senior Vice-Principal of the University of Aberdeen, said he was delighted to be able to celebrate the launch of the book in Wilson’s home city.

“The city of Aberdeen and the University has a long association with George Washington Wilson – a true pioneer of photography – and we are proud not only to hold the world’s largest collection of his work but to have undertaken extensive work to digitise this wonderful collection and make it available to the public.

“The book George Washington Wilson, Artist and Photographer is an outstanding work which will bring his work to new audiences. “We are delighted to be able to welcome Brian May and Professor Roger Taylor to our campus to celebrate the launch of this new work and look forward to hearing their fascinating insights into his life and work.”

Brian May said: “It’s my great pleasure to introduce to you all this beautiful book, at the request of its author, my great friend Professor Roger Taylor. It’s been many years in the making, and I’m confident it will have been worth every minute. It presents the life and work of celebrated Scottish landscape photographer George Washington Wilson, who with great skill and flair, photographed the unique beauties of the Scottish countryside in the 1860s with his stereoscopic camera. The resulting 3-D images proved immensely successful and established Wilson’s national reputation as a pre-eminent photographer. Now, courtesy of the Lite OWL included with every book, Wilson’s images can be experienced in exactly the same way they were enjoyed by the Victorian public.”

Tickets for the launch event, which will be held in the Art’s Lecture Theatre, King’s College, Old Aberdeen on August 16, are available from www.abdn.ac.uk/events/13419/

Making the collection available to the public

In 2011 the University of Aberdeen made available online more than 35,000 high resolution digital versions of images originally taken between 1853 and 1908 by the Aberdeen photographic firm George Washington Wilson & Co.

The images, taken throughout Scotland the UK and beyond, allow the examination of details previously hidden from the naked eye.

The George Washington Wilson online archive can be viewed at www.abdn.ac.uk/historic/gww/index.htm