As part of the Science Museum's Illuminating India season a new exhibition Illuminating India: Photography 1857-2017, will be an ambitious and unprecedented survey of the technological and cultural development of the medium in India, examining photography’s changing role in charting the recent history of the country. The other second exhibition in the series Illuminating India: 5000 Years of Science and Innovation, will celebrate India’s central role in the history of science and technology by exploring its influential contributions to subjects as diverse as space exploration, mathematics, communication and engineering.

Photography 1857-2017 is the first exhibition to trace an arc from the beginnings of photography in India in the mid-19th century to the present day, and pivots around 1857 and 1947: two key dates in India’s recent history.

Looking at those photographers who have been inspired by their own experience of the country, the exhibition explores evocative works from a roster of eminent international practitioners, from India’s first known photographer, Ahmad Ali Khan, to award-winning contemporary photographer Vasantha Yogananthan.

Arriving in India shortly after its invention in Britain in 1839, photography became a powerful tool in the hands of military men and colonial administrators in the drive to document and dominate the people, architecture and landscapes of the subcontinent. Western art history has tended to overlook the Indian photographers working contemporaneously with the first foreigners from the 1850s onwards. This exhibition aims to explore their work afresh in an international context as Indian art photography pioneer Marahaja Ram Singh II is exhibited alongside Samuel Bourne and the country’s first female photojournalist, Homai Vyarawalla, is shown with contemporary Henri Cartier-Bresson. 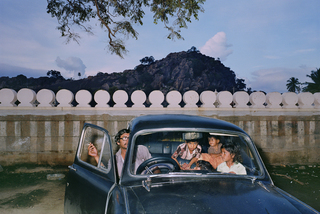 Drawing on exceptional loans from diverse international collections including the Royal Photographic Society Collection, some of which will be shown for the first time in the UK, the exhibition offers a visually sumptuous history of photography in India. From the very first fragile salt prints to the latest digital imagery, every iteration of the photographic medium will be on display. Photography 1857 –2017 reveals how illuminating a subject India has been for photographers across three centuries: and shows in turn how photography has illuminated India to the viewer, both as place, and as idea.

Ian Blatchford, Director of the Science Museum Group, said: ‘India’s history and culture are built on a rich tradition of scientific thought and innovation. The stories we will be showcasing through this vibrant season not only shaped India but had global significance. By taking a global perspective on the development of science, technology and photography, we hope to engage new audiences and strengthen international relationships between British and Indian scholars and cultural institutions.’

An extraordinary series of public events will run during the Illuminating India season at the Science Museum, including film screenings, workshops, panel discussions and live performances. The full programme of events will be announced soon.

"I find it somewhat difficult to make statements about my work in words and think that this is best done through my photography, but the following observations may serve. I like experimentation in photography but not overstepping the dividing line between artistic expression and gimmickry for its own sake. Though attracted by abstracts and graphic shapes, I find people the most rewarding subject because of the infinite variety this offers. As I am involved with theatrical photography and believe that specialization can be limiting, I like to compensate by taking people 'off stage' or rather off guard, children in particular.

You have missed out on Anya Teixeira!