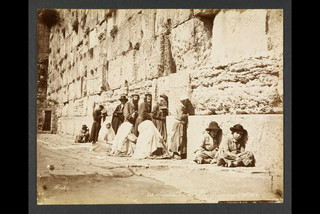 In Search of Biblical Lands: From Jerusalem to Jordan in 19th-Century Photography features some of the first photographic images of the eastern margins of the Mediterranean. This region is one of the most photographed places on earth, with subjects ranging from architectural sites to evocative geography, scenes of pastoral life, and its people.

The photographs on view in this exhibition reveal what the travelers of the 1800s discovered on their journey: a landscape of belief, at once familiar yet still mysterious, and includes  rare, early daguerreotypes, salted-paper prints, and albumen silver prints, created between the 1840s and 1900s by the leading photographers of the time, including Felice Beato, Maxime Du Camp, Auguste Salzmann, James Graham, Louis Vignes, Frank Mason Good, and Frederic Goupil-Fesquet.

Highlights of the exhibition are photographs by English photographer Francis Frith (18221898), whose compelling images were made during three trips to the Holy Land in the late 1850s, and daguerreotypes by French photographer Joseph-Philibert Girault de Prangey (18041892) from his three-year tour of the Near East, culled from the Getty Museum's collection.Visitors can see the region up-close through stereoscope tours on two large stereo viewers that digitally replicate the three-dimensional immersive experience. Each viewer has a selection of 12 cards that recreate a journey around Jerusalem and Palestine with particular attention paid to objects and places of interest and local color connected through scriptural citation.Also of considerable note are a series of photographs made during the Duc de Luynes subsidized expedition to the Dead Sea and beyond, including views of ruined Crusader castles in what is now Jordan, and of Petra, the city carved out of rosy sandstone that had been first visited by Europeans in 1828 and is now a world heritage site in Jordan. These rare images come from the GRI's acquisition of the entire publication of the Duc de Luyne voyage.

Are you referring to the photo of your profile? Thanks.

Would you please ID the thumbnail photograph on the left & below "Add a comment".  Where is it?  Is it possible to see a larger sized copy of it?