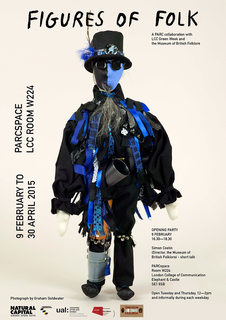 A collaboration between London College of Communication, LCC Green Week 2015, the UAL Photography and the Archive Research Centre (PARC) and the Museum of British Folklore, Figures of Folk explores ongoing traditions through a series of large format photographs by Graham Goldwater, of objects associated with British folklore, alongside letterpress posters created by LCC students, inspired by ancient phrases and words.

In 2009, Simon Costin, the Director of the Museum of British Folklore, put out a call to the nation’s Morris sides to replicate their team kit in miniature, as handmade dolls. . The response has been overwhelming, with nearly three hundred sides participating in the creation of a physical archive.

Together with the Morris dolls, The Museum of British Folklore owns a collection of jig dolls – articulated wooden figures, which were used by street performers to create a rhythmic beat and movement, mimicking traditional folk dance. Both collections have been photographed by Graham Goldwater, exploring the ways in which the photographic image both documents museum objects and extends their meaning and reach. Both object and photograph become an artefact of dancing and celebration which has taken place in Britain for nearly five hundred years.Folk_Figures_web_version.jpg