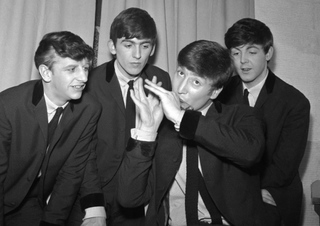 For nearly two decades starting in the late 1940s, Hammond captured the definitive images of virtually every leading British musician, as well as many of the visiting American artists. From Tommy Steele to the Beatles, Shirley Bassey to Dusty Springfield, he captured the emergence of British rock 'n' rollers. First circulated through the New Musical Express, his work set the standard for pop photography for following generations.

Entitled "Halfway to Paradise: The Birth of British Rock Photography" , the exhibition comprises over 100 of Hammond's photographs which takes visitors back to the birth of British rock. It includes a great soundtrack and interactives which explore the music, musicians and fashions of the time.  It has been drawn from the from the V&A Theatre and Performance collections.

If you want to get rockin', details of the exhibition can be found here. And an obituary of Hammond can also be read here and here.

Photo: Image of The ???? (what's this group called again?) by Harry Hammond (copyright).