Hills and Saunders' Harrow negative archive being part sold off on eBay...but the majority is retained and preserved 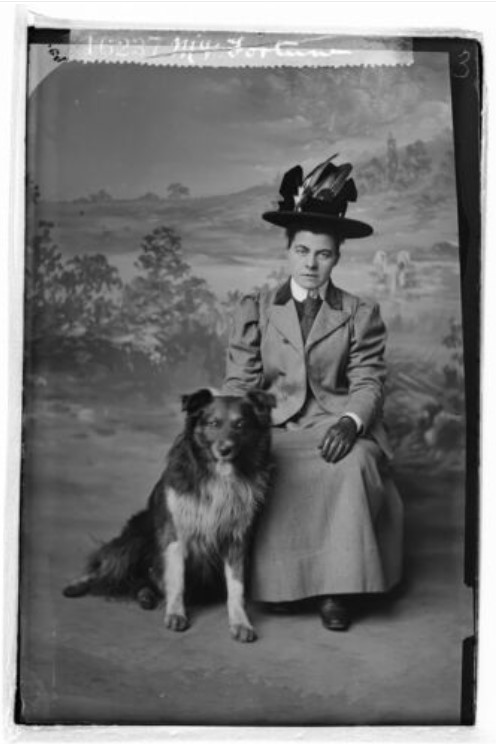 A short post on BPH has drawn attention to the current owners of the Hills and Saunders negative archive selling off negatives individually on eBay. The collection is - or was - owned by Pete Boswell who posted on BPH about his acquisition here in 2103.

A previous website Harrowphotos.com which offered the opportunity to buy prints was registered in 2014 and is now no longer available. Pete Boswell was a director of Save Photo Ltd which was dissolved in 2016 and in that capacity he reported on saving Churchill negatives from the H&S archive. A number of other associated companies are also now dissolved, suggesting that the original commercialisation of the archive did not live up to expectations. In an interview with BPH today, Pete Boswell explained that the Hills and Saunders Archive which consists of some 94,000 plates has now been fully digitised and indexed. The current owners have invested a considerable amount money into the archive's rescue and recovery, conservation, indexing, cataloguing and digitisation. It is considered one of the largest collections of of its kind in private ownership.

The majority - some 96 per cent - of the pictures contained within the archive are related to Harrow School pupils and staff from 1860-1965 and these are being retained by the owners and a selection of them are to be published shortly.

A small selection of around 200 plates that are not core to the main Harrow collection are being disposed of and are being offered to collectors and private owners. It is some of these that are currently on eBay.

An index of all the Hills and Saunders negatives, by number and name, is available here: http://freepages.rootsweb.com/~victorianphotographs/family/hills/hi...

Images from current eBay listings (reversed from negative to positive)

After inquiry of the Ebay seller I learn it was indeed Harrow School which originally held the Hills & Saunders glass plate negs which were or are essentially of Harrow School subject matter and 'disposed of’ by the school antiquarian library a while before their recent auctioning off of selected book and paper antiquities that we’d been alerted to via this British Photographic History site early in November 2020. I further learn H&S hand-inscribed ledgers delineating detail of the glass plates is part of ‘the H&S hoard’ which the present seller informs me they bought from a 2nd party after Harrow library’s as far as I am concerned ‘unfortunate and inadequate conserving’. The now 3rd party ‘private owners’ says “We purchased the archive from a private seller who had received the archive from Harrow School when they discarded it. We actually found the archive decaying on farm near Cirencester when it was rescued. The archive originally came from the cellars of the former Hill (sic) & Saunders Studio on Harrow-on-the-Hill.”

Plenty of those Hills & Saunders glass plate negs are still available on Ebay needing ‘rescue’. Roll Up! Roll Up! It's Black Friday Soon - put in an offer below what the seller asks and you’re sure to hit on a jackpot of a bargain. There’s a glass plate negative of a scary lady attired in black huntress gear replete, as one ascertains under her riding jacket, with the wearing of a constricting waist-squeezing corset – excellent for encouraging constipation we understand. Her accompanying Afghan hound squints at observers of his lady with downright suspicion don’t you think? 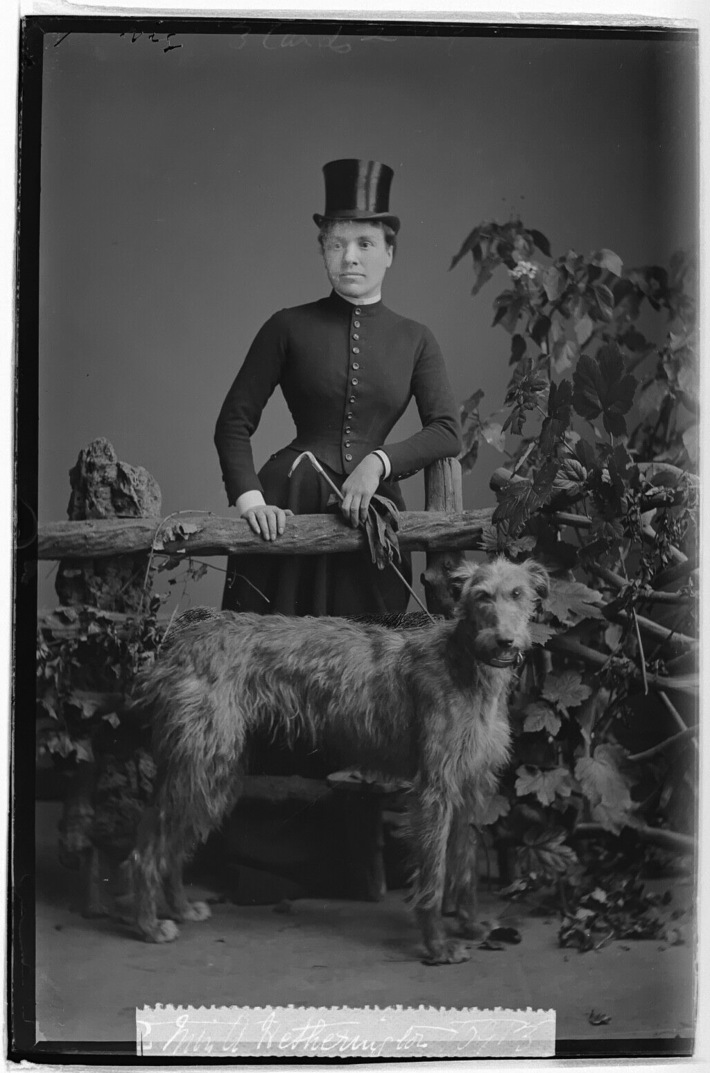 Besides Rugby School's Hills & Saunders glass plate negs sold off via Ebay - Rugby school is shortly auctioning off a selection of books and papers out of their antiquarian library among which Lots 221, 222, and 224 (x3 books published 1887, 1888 and 1890) are photogravure plate repros of Peter Henry Emerson's exquisite photographs of rural life and scenes. A following portfolio Lot 225 are for Francis Bedford albumen prints depicting the Middle East tour he took with the Prince of Wales at Queen Victoria's request.

Well - 'There you go' - Having been 'poignantly arrested' by an Ebay boy soldier image I have presumptuously, spontaneously and, having unwittingly offered £20 for the £30 image I didn't expect would be accepted, I find I'm the owner of a Harrow photographer Hills & Saunders 'boy soldier negative glass plate' that's mine for the taking. What do I do with an Edwardian photographic glass plate imaging a 1916 WW1 boy soldier? Maybe the IWM will have it as a donation. Will they? It's no earthly use to me other than staring at it and 'wondering'. 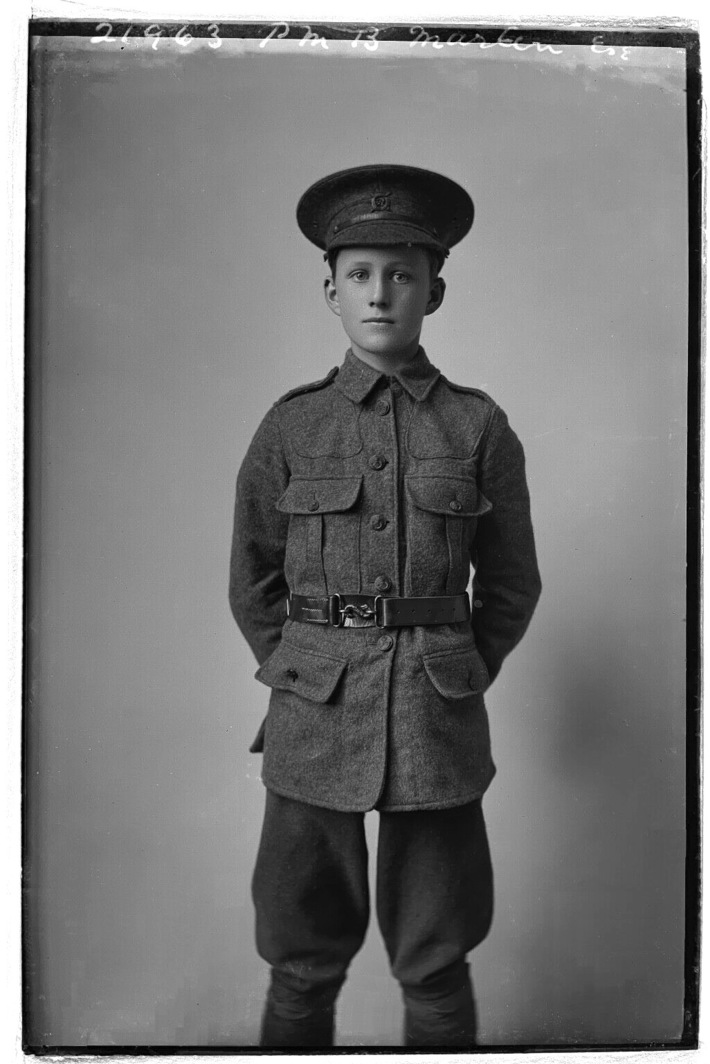 Makes you want to weep doesn't it - with the evident profiteering and sell off of these archival gems that should be kept within the archive even if considered 'disposable'. Perhaps digital copies have been processed even if glass plates are being 'chucked'? Named characters on the Ebay plates could be of use to local Harrow family history. Anyone thought of clicking on the Ebay pics to their enlarged state and then pulling them off into a desktop folder by way of capturing them all? Any archival value in that? The Ebay plates appear to be wrapped in transparent film. One plate is poignantly arresting of a boy soldier of 1916 who barely looks 14 or 15 years of age. Or, seeing as collection is noted as essentially of Harrow School is this 'boy soldier plate of 'P. M. B. Martin Esq., 1916' a Harrow School cadet?