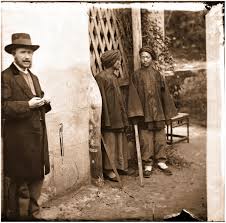 One of the earliest travel photographers in Asia, John Thomson, who travelled extensively across China, Cambodia, Thailand and Malaysia, in the 1860s and early 1870s, is being honoured at a ceremony on Saturday, 13 July 2019 which will celebrate his newly restored grave.

Thomson photographed the people, landscapes and monuments across a large part of south east Asia, resulting in an important series of books describing the places he visited and his own experiences. His grave in Streatham Cemetery which was lost for many years until its rediscovery by Terry Bennett has been restored following a crowdfunded project led by Betty Yao MBE.

Thomson, was born in Edinburgh in 1837 and died in London in 1921. He is widely acclaimed as one of the best photographers of China of the period. On his return to London in 1872 he ran a successful portrait studio gaining the royal warrant in 1881. He was a member of the Royal Photographic Society from 1879.  Thomson also acted as the principal photography teacher for the Royal Geographical Society, training a new generation of travellers and explorers in photography.

The commemoration will take place in Streatham Cemetery, Garratt Lane, Tooting, London, SW17 0LT (lot 545, block F) at 11.00am, Saturday 13th July 2019. Everyone is welcome. The nearest underground station is Tooting Broadway, followed by a 10-15 short walk or buses 44, 77, 270, G1 (Streatham Cemetery stop). Afterwards, there will be celebratory drinks in a nearby pub to which everyone is invited.