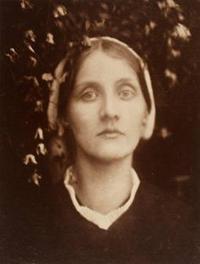 If you happen to be visiting New York City this autumn, do drop into 962 Park Avenue at 82nd Street where you can view a fine display of more than 20 albumen prints from 1864 to 1874 taken by 19th century British photographer Julia Margaret Cameron (1815–1879). Although a late starter in photography at the age of 48, she is considered one of 19th century’s greatest portraitist.

The majority of these photographs were gifted to her niece, Adeline Maria Jackson, and have remained in the family and not been exhibited before. One of the highlights of the display is a carbon print of A Beautiful Vision, Julia Duckworth, 1872, Cameron’s cherished niece and goddaughter who was a frequent sitter and provided inspiration for her aunt’s photographs. Julia later became the mother of Vanessa Bell and Virginia Woolf.

Other notable 'celebrities' caught on image by Cameron include Sir John Herschel, a strong support of her, whose 1867 portrait is considered one of the most iconic images of the distinguished astronomer. The following year while working on The Descent of Man, his second landmark book on evolution, illness forced Charles Darwin to take a break in Freshwater on the Isle of Wight, an island in the English Channel where Cameron created the majority of her work. “I like this photograph very much better than any other which has been taken of me,” wrote Charles Darwin about one of the portraits that Cameron made of him.