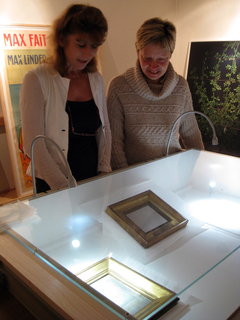 The National Media Museum held a conference in 2010 to present new research into three Niépce plates dating from c1826 from The Royal Photographic Society's Collection which is held at the museum (see: http://britishphotohistory.ning.com/events/niepce-in-europe) The conference revealed new information about the plates and through scientific analysis by the Getty Conservation Institute began to explain the origins of the plates and how they were made.

The museum, with conservator Susie Clark and the GCI, has developed an oxygen-free display case and special lighting which will allow the plates to be shown to the public. The prototype case which is being funded by The Society, was shown to it recently.

The finished case, along with the conference proceedings, should be ready early in 2013.