Beryl was a familiar face at the early auctions of photography and the name 'Jubilee' would be heard repeatedly in the days when a buyer's name was called out in the auction room and printed in the realised price sheets. She attended the first photography fairs and was a long-serving committee member of the Historical Group of the Royal Photographic Society which she joined in 1973. She was a founding member of both the Group and the Magic Lantern Society. Her shop was one of the first in Britain specifically devoted to historical photography and only closed in 2002.

Beryl Roques was born in 1932 in Edmonton, north London. She attended RADA where she met Richard 'Dick' Vosburgh, the actor, writer, lyricist and broadcaster. They married in 1953 and remained together until his death in 2007 living in a beautiful town house in London's Islington. They had a son and five daughters.

While she was studying at RADA she was snapped up to be one of the main anchors of the 1952 BBC Radio series: The Younger Generation Under 20 Parade. It was described in the Radio Times as 'A programme on things to read, see, and hear, presented mainly by under-twenties'. She starred in this weekly series throughout 1952-53. Her resulting acting career highlights included: Miss Phillips in BBC Radio's Mrs Dale's Diary; Princess February in The Golden Cage for Children's Hour; the 1954 Home Service series entitled Home and Away with Dora Bryan and the BBC Revue Orchestra; alongside Phyllis Calvert in Monday Matinee presents Craig's Wife; 1961 film: A Little of What She Fancied and 1962's Associated Rediffusion TV series No Hiding Place.

In 1965 she became one of the regular presenters of the popular BBC children's programme Play School. She presented 35 episodes of the show alongside regulars Eric Thompson, Derek Griffiths, Johnny Ball and Brian Cant.

In 1977 her real-life actress daughter Tilly Vosburgh played her offspring in Secret Diaries for Yorkshire Television (her other daughter was played by Sophie Thompson). Also in 1977 she performed in a Jubilee theatre show at the Theatre Royal Drury Lane. Beryl supported Dick's successful career in television, radio, theatre, film and magazine, often assisting him on projects when he had plays on Broadway, on tour and in the West End and looking after the children when Dick was heavily involved in a project.

She played various roles in the demo tapes for her husband's musicals: Windy City, A Day in Hollywood A Night in the Ukraine and A Saint She Ain't to name a few. Beryl appeared in Jango (1961).  Away from her acting and shop, she was a professional photographer, photographing theatrical productions and taking the Spotlight pictures of countless high-profile actors and actresses. 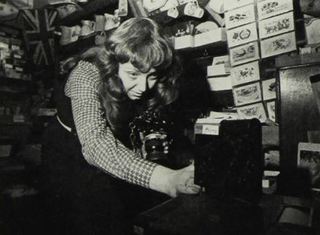 Michael Pritchard writes...As a boy in the 1980s I got to know Beryl through the RPS Historical Group. I remember visiting her shop, taking care to visit on a Wednesday or Saturday, when it was open. Beryl's shop included plenty of cartes de visite, stereocards, albums, stereoscopes, lantern slides, cameras and the more accessible end of the market. She had a particular interest in photographic jewellery. When one visited she was more likely than not to press a photograph in to your hand as a gift irrespective of whether you bought something. She regularly donated material to institutions or to individuals if she felt it was the right home for it. Beryl was kindly, knowledgeable and wonderful company over dinner at her College Cross house.

UPDATE: Amy Vosburgh has been in contact with details of Beryl's funeral which will take place on 18 July at Golders Green Crematorium. Anyone wishing to attend is asked to contact her on 07866 718030.

UPDATE 2. Thank you to Amy for additional information about Beryl's film and television career.

As Michael mentioned, her shop "Jubilee" was a wonderful place to browse.  When in London it was a "must" visit on the Wednesday or Saturday.  I totally lost track of time whenever I was in her shop.

Yes, I too have happy memories of parking the car up in one of the crowded back streets, and tramping through the alleys to Beryl's shop.  And what a shop - crammed shelves floor to ceiling, boxes and drawers full of treasures, and stereos you could easily spend all day browsing through.  They don't come like that any more.  Best of all was Beryl herself, always welcoming, and full of knowledge. Oh for a time machine!

Just last month I was reading back issues of The Photographic Collector and seeing ads for Beryl's 'Jubilee' brought back happy memories of my visits in the late 1980s when I would spend a happy hour sitting on a chair in the corner of the shop, browsing though boxes of stereoviews. Beryl always greeted me warmly and I would invariably leave with a few treasures in my bag. Happy days!

Her shop was my regular on Saturdays.

She was a lovely lady, may she rest in peace.

Any collector of photographs who visited Beryl’s treasure trove, Jubilee Photographica, will have an indelible memory of the warm welcome, enthusiasm and expert guidance she provided for anyone who entered her tiny crowded little shop in Pierrepoint Row. A trip to Beryl’s was always the high point of my visits to London in the 1980s and ‘90s. I can only hope she’ll be opening a store up there in photographic heaven!