Papers, photographs and collections of Prince Albert to be published for the first time 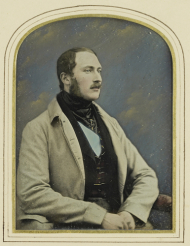 A major new digitisation programme announced by Royal Collection Trust will transform understanding of Prince Albert's role in national life and his profound influence on Victorian society. The Prince Albert Digitisation Project is supported by Sir Hugh and Lady Stevenson in honour of the late Dame Anne Griffiths DCVO, former Librarian and Archivist to His Royal Highness The Duke of Edinburgh, and by the Royal Commission for the Exhibition of 1851.

The Prince Albert Digitisation Project will include the significant body of early photography collected and commissioned by Prince Albert, more than 10,000 photographs dating from 1842-1861.

Both Prince Albert and Queen Victoria were enthusiastic supporters of the new medium of photography and in 1853 became patrons of the recently established Photographic Society. For Albert photography perfectly combined his love of art, science and technology.  He regularly attended Photographic Society meetings, supported the Society's research, visited exhibitions and purchased works.

His collection is diverse and extensive, containing examples by many pioneering 19th-century photographers, including Roger Fenton, Oscar Gustav Rejlander, Dr Hugh Welch Diamond, George Washington Wilson and Charles Thurston Thompson. Fittingly the earliest photographs in the Royal Collection are of Prince Albert, including the daguerreotype of 1842 by William Constable, the earliest surviving photograph of a member of the royal family. From the early 1850s, Albert commissioned photographs to document life in the royal household, family gatherings and visits from important guests. These include by Dr Ernst Becker, the Prince’s librarian and private secretary, who introduced darkrooms at Windsor Castle and Buckingham Palace, and became an accomplished photographer. The Prince also collected photography to record national and international events, such as The Chartist Meeting on Kennington Common by William Kilburn, 1848 and The Royal and Imperial Visit to the Crystal Palace by Negretti & Zambra, 1855.

Prince Albert also recognised the power of photography as an educational tool.  In 1853 he commissioned the Raphael Collection, a study collection of over 5,000 prints and photographs of almost every work then regarded as being by or after the Renaissance master.  The images were mounted on large folio sheets, placed in 49 portfolios and housed in a custom-made cabinet in the Print Room at Windsor Castle, where they remain today as an early example of an art-historical illustrative survey.

The announcement of the project can be read on the Royal Collection Trust’s website and further news will be shared with BPH in due course.