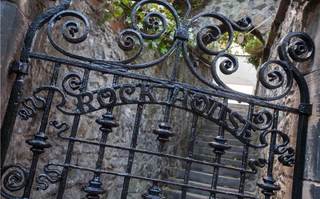 In 1843 Rock House was owned by the scientist Robert Adamson, who in the same year formed a partnership with the artist David Octavius Hill to utilise the newly invented Calotype photographic process. Together they are widely credited with having established the use of photography as an art form.

Hill and Adamson were aided by Rock House's elevated position and abundant natural light. Their subjects ranged from churchmen to the literati of Edinburgh, and from architecture to working class scenes, most famously the fishing community of Newhaven.

Major collections of their work are held by, amongst others, the Scottish National Portrait Gallery, the Getty Museum and the University of Glasgow.

Rock House continued as a photographic studio for over a century, passing through the hands of several prominent photographers including Archibald Burns and Francis Caird Inglis