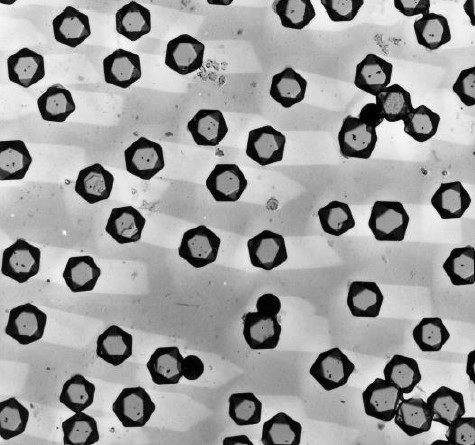 The text below is provided in response to a request from Roger Hyam for a fuller explanation of the “Reversal F” ( a Kodak term ) direct-positive emulsion technology used in Kodak PR10 instant Film and Ektaflex products which I referred to in the “Interesting Imaging Systems” article I posted on my page a week ago which came with a free download of my recollections document.

I didn’t explain the mechanism of the Reversal F process in detail. The name is misleading because it is not a “reversal” system but uses a positive-working emulsion. I mentioned the discovery of the effect when inadvertently, the dark-room lights were switched on while a film was being developed. The emulsion concerned had high internal sensitivity. That is, much of the latent image silver was produced in the interior of the emulsion crystals or “grains”. In this case it was because the precipitation process which produced the grains created a lot of disorder in the structure of the crystal lattice. These defects form “sensitivity centres” or localised regions which trap electrons formed during exposure to the imaging light. This is the first step in the normal process of latent image formation and is followed by the migration of silver ions within the crystal to the trapped electron and the formation of an atom of silver. The presence of the silver atom increases the effectiveness of the sensitivity centre which retains subsequently trapped electrons for longer thus giving more time for a silver ion to add another atom on combination with the second and later trapped electrons. The process continues until the cluster of silver atoms reaches a number sufficient to render the crystal more susceptible to reduction during the development process. Usually, the crystal surfaces are treated with chemical sensitisers, typically sulphur or gold compounds or a combination of both. These usually produce more competitive sensitivity centres which result in most of the latent image being formed on the surface.

If this had been the case when the discovery was made, the film would have simply fogged. Because most of the latent image had been formed internally the situation was different. The dark-room lights provided a flood of released electrons into the conduction band of all the coated grains. In the grains exposed during imaging these mobile electrons were trapped by the latent image. In the now swollen wet emulsion layer the balance between the surface and interior of the grains was changed. Unexposed grains now had surface sensitivity sufficient to compete successfully for electrons and therefore formed latent image silver on the surface. This is probably because the “positive holes” ( bromine atoms ) formed when silver atoms are formed can escape from the crystal surface rather than be available to reverse the formation of silver atoms while still near the latent image.

In the absence of silver halide solvents or substances which can disrupt the crystal structure and reveal the internal image, the surface latent image is the only catalyst for the development process so the grains which had been exposed to image light and had been prevented from forming surface silver by the internal latent image during the second non-image exposure were not developed. The response of the emulsion was therefore positive.
When it came to producing positive-working emulsions for the instant film products decades had passed and the control over emulsion precipitation and chemical sensitising had been transformed. Frank Evans in Rochester produced beautiful, pure silver bromide emulsions like the example I included in my piece which I made when working on the Ektaflex project. These were made in two precipitation stages. Firstly an emulsion was produced to provide a core. This was then chemically sensitised with sulphur ( and gold I think ) after which an outer shell of silver bromide was added. Finally the surface was sensitised with sulphur.

The other major change was to replace light as the generator of the non-image-wise electron injector with a chemical source. Like the developing agent this, so-called “nucleating agent” ( a poor name in my view ) is a reducing agent but a little less subtle. The developing agent is gentle enough not to reduce grains not decorated with latent image, relying on the latent image’s catalytic action to speed up the process and so distinguish exposed from unexposed grains. The nucleating agent was on the other hand not so powerful that it reduced any silver halide available like a fogging agent in a reversal process. Also, in the case of Ektaflex, the same simple solution had to process both positive and negative versions so the nucleating agent had to be incorporated in the film structure.

You will probably now appreciate why I didn’t include this in my article!