My last post to this blog concerned the two Valley of Inkerman photographs taken in 1856 by either James Robertson or Felice Beato, but more likely the latter. In this blog, the image entitled The Inkerman Ravine (see below) is discussed. Although Robertson’s signature is in the bottom right-hand corner, it also may have been the work of Beato. Whether this photograph was taken in 1855 or 1856 is unknown to the author. 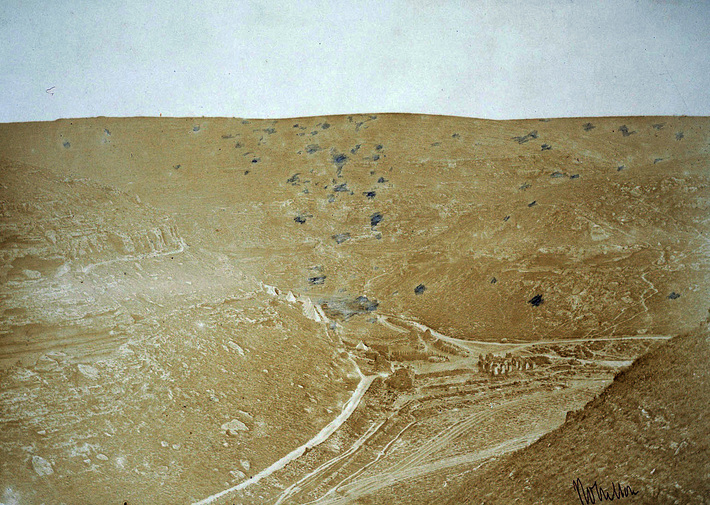 The only description of this photograph comes from the Royal Collection Trust website that reads: -

During the Crimean War, the valley in the picture was called the Careenage Ravine or Careenage Creek Ravine by the British and the Ravin du Carenage by the French. The side-ravine that leaves the Careenage Ravine in the centre of the picture was called the Mikriakov Glen. How the photograph came to be called The Inkerman Ravine is unknown, but it may have been deliberate ploy to associate the location with the famous battle in order to sell copies to the public in Britain. However, the Battle of Inkerman was not fought in this ravine on 5 November 1854 as the Royal Collection Trust suggests. It was largely fought on the Inkerman Ridge, a section of which is seen on the skyline of The Inkerman Ravine.

Nevertheless, the location in the image is significant because there was a famous action here during the Battle of Little Inkerman, which was also known as the Combat of the Lesser Inkerman, on 26 October 1854. As at the Battle of Inkerman just over a week later, the main Russian attack took place on the Inkerman Ridge with their troops first occupying the high ground known as Cossack or Shell Hill. This hill is just beyond the high point on the skyline of The Inkerman Ravine. In addition to their main thrust on the Inkerman Ridge, the Russians also directed a column of what was believed to have been marines or sailors up the Careenage Ravine. This column of 600-800 men was to advance up the Careenage Ravine and a side-ravine known as the Wellway before appearing at the rear of British lines on the Inkerman Ridge. However, sixty men of the Guards under the command of Captain Goodlake were posted across the Careenage Ravine. These men initially retreated a few yards, but then halted at a small trench across the floor of the ravine and fired on the Russian column. According to a map published by Alexander Kinglake in Volume 5 of his book entitled The Invasion of the Crimea, the trench was at the location seen in The Inkerman Ravine. The Russians hesitated and there was a stand-off for some time. After the arrival of British reinforcements, which consisted of Captain Markham and men of the 2nd Rifle battalion, there was a sharp encounter and the Russians were forced to retreat back down the Careenage Ravine.

Russian forces also advanced up the Careenage Ravine during the Battle of Inkerman, but this time they did not encounter any resistance and almost reached the end of the Wellway on the Inkerman Ridge. Here they were defeated and had to retreat the way they had come.

The Careenage Ravine at the location seen in The Inkerman Ravine was also photographed by Colonel Vladislav Klembovsky, who later became a leading figure in the Russian army. He died in a Soviet prison in 1921. His image, which was published in an album of images of Crimean War sites in 1904, is shown below. He states in his caption that the slopes in his picture were those of the Careenage and Mikriakov Ravines. The author’s own image taken in 2012, which is also presented below, shows that the junction of the two ravines as captured in The Inkerman Ravine is still recognisable today. 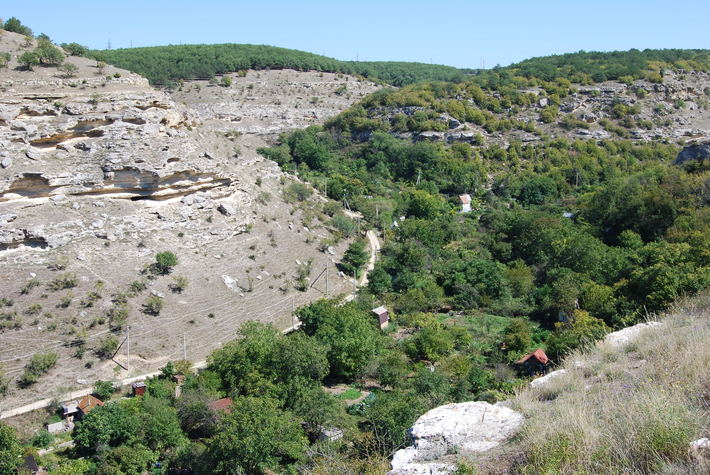