Publication: The Photograph and Australia 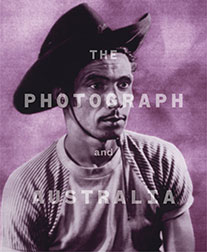 Visually rich with fine reproductions and high-level production, The Photograph and Australia tells the many stories of photography in Australia over the last 175 years. It examines the sense of wonder which the photograph can still induce for its ability to capture both things of the world and those of the imagination, and how Australia itself has been shaped by photography. Despite the complex history of photography in Australia, there have been few books published which present a comprehensive national view.

JUDY ANNEAR is senior curator, photographs at the Art Gallery of New South Wales. GEOFFREY BATCHEN is professor of art history at Victorial University. MICHAEL AIRD works as a curator, researcher, and writer in the area of Aboriginal arts and cultural heritage. KATHLEEN DAVIDSON is an independent photo scholar.MARTYN JOLLY is head of photography and media arts at the ANU School of Art. JANE LYDON is an Australian Research Council Fellow athe the Wesfarmers Chair of Australian History at the University of Western Australia. DANIEL PALMER is associate dean of graduate research and senior lecturer in the art history and theory program at MADA, Monash Art Design and Architecture.

I would be really interested to have your critical responses.