The image is that of two ladies, one seated, one standing, posing on a garden path at an address I believe to be in Lincoln, and which was taken by Mr Combes in 1930, when he would have been about 17 years of age.

Eagle-eyed readers will have noticed that lurking in the bottom right-hand corner of the image is a clear, if a little fuzzy, image of a medium-sized, woolly dog. This, according to other captioned images in the collection, is Rex. Or at least, an impression of Rex.

I am very keen to hear members' views regarding how this 'apparition' could have positioned itself on this otherwise plain and commonplace family photograph.

I have examined the negative very closely but cannot find any evidence of double-exposure, or other forms of image manipulation. The negative immediately preceding this frame displays an image very similar in content and pose, but without the misty canine presence.

I am a 'spirit photograph' sceptic, and in any case, there are further photographs of Rex in the collection that would appear to have been taken after the image in question is dated. Tom, I think you're right, we will probably never know for sure how this negative was formed, and I agree that it was almost certainly contrived. But how....?

Michael, I agree it would take a degree of skill that would be surprising in a teenager, and one would have expected some reference in the caption, but I wonder why he didn't refer to the ghostly image in it either; it's hard to believe nobody noticed it at the time.  It's interesting that the other picture of Rex is almost identical, apart from the position of the front legs.  It could be he was experimenting to get the positioning right (if my suggestion is correct).

We'll probably never know for sure, but it doesn't seem to have been an accidental double exposure and I can't think of another way it could have happened.  It's certainly intriguing.

Thank you for your response. I agree that there is a strong possibility that young James Combes may well have been honing his creative skills with the camera, but this resulting photograph would surely be some accomplishment for one so young and inexperienced.

He would also have had to have been pretty nifty in the darkroom to be able to produce a double exposure that displays no secondary background behind the image of the dog. If, however, we accept that James was something of a prodigy then it is even more baffling that, given this early success in photographical prestidigitation, he decided to produce no further examples of his craft.

Having said all that, I agree that, as you say, perhaps although he produced other examples he did indeed think that this one was the only one good enough to preserve - but then why didn't he allude to this in his album caption, rather than the somewhat prosaic "Mother & Mrs Kollein." 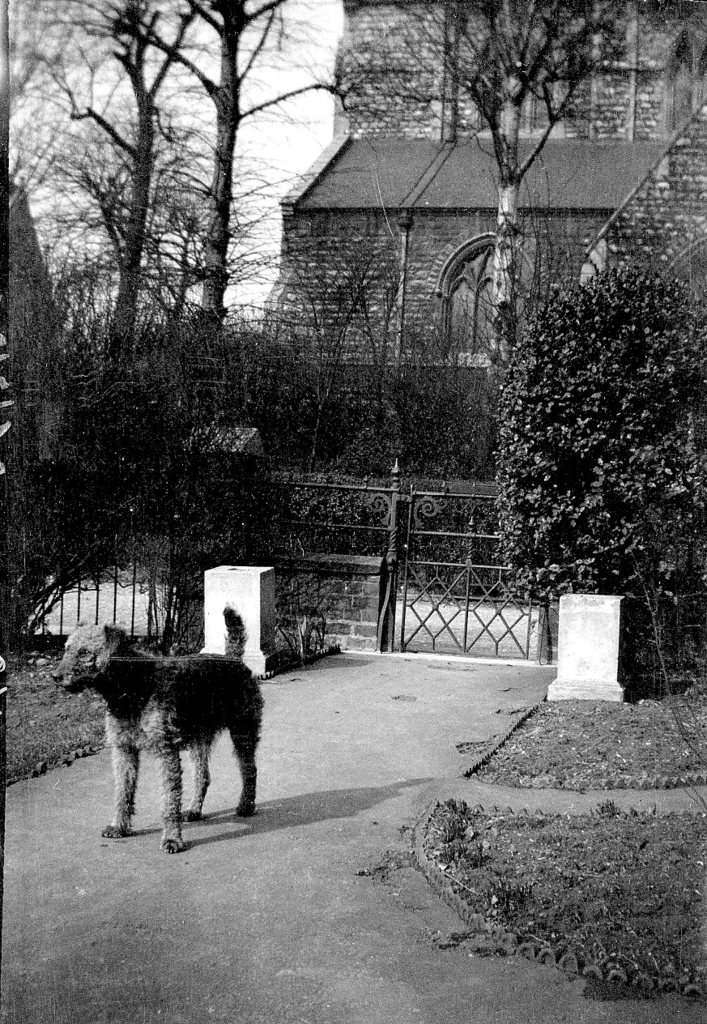 I have attached a photograph of Rex in a similar stance that would appear to have been taken at about the same time as the 'spirit' photograph, for comparison.

I've been puzzling over this.  Unless it was a very still day surely an exposure long enough to allow Rex to wander off half-way through would have entailed some blurring of the leaves.  I also agree that he would have less well defined than he is had that been the case.

But we are assuming that this was an accident.  We can't know for sure, but it is possible that this was done on purpose as two separate exposures combined to produce a ghost image.  It would have been easy for someone with the requisite skills to do, either with or without the knowledge of the sitters.

Why anyone would is another matter - possibly to show they could: as a 17-year old Mr Combes may have come across spirit photographs, read about the ways they were said to have been produced and thought he would have a go, using the handy Rex as his model.

I'm not altogether convinced by this explanation - if Mr Combes had been an experimenter I'd expect to see others in the collection, but it's the only one I can think of.  Perhaps it was the only one he thought good enough to preserve.

Thank you for your comments. I appreciate your point regarding exposure time in the 19th century but this photograph was taken in 1930, albeit on a somewhat overcast day. Even if the photographer had used a very slow shutter speed I would have expected to see a blurred image of the dog, 'wiping' across the lower part of the negative, if it had bolted mid-exposure.

these "ghosts" are very frequent in 19th century photos when exposures were longer. It just happened that on that not so sunny day the photographer had to choose a slow exposure and asked his models to stay still for a few seconds. The dogs was  not patient enough (or he saw a cat, a rabbit, or a butterfly) and moved away before the exposure was complete. By the way this is how they used to make stereoscopic photos of "ghosts" in the 1850s. The whole process is explained by David Brewster in his 1856 book The Stereoscope, its History, Theory and Construction. Hope that helps. Best