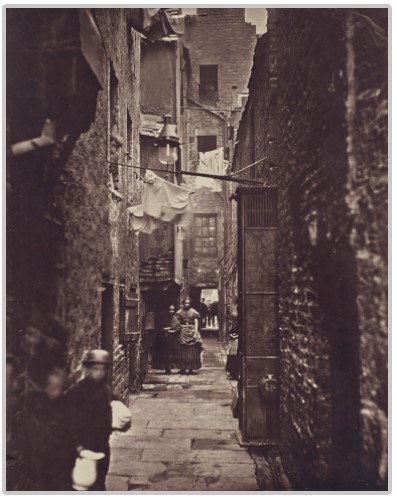 To coincide with the 150th anniversary of Thomas Annan's Old Closes and Streets of Glasgow, photographer Frank McElhinney re-traces Annan's footsteps with a photo trail along the same streets where Annan made the original photographs. Annan's famous street studies of this historic area of Glasgow are shown in the windows of modern businesses along High Street and Saltmarket, taking the viewer on a journey through history.

One hundred and fifty years ago Thomas Annan published a series of thirty-one photographs of the old streets and closes of Glasgow. They are recognised as perhaps the world’s first attempt at what we now call social documentary photography. An 1866 act of parliament had approved the clearance of Glasgow’s overcrowded and epidemic prone slums. With the exception of one photograph made in the Gorbals, all of the rest were made in and around the High Street and Saltmarket. It was once assumed the photographs were commissioned by the City Improvement Trust, but there is no real evidence of this. It is more likely that Annan began the series on his own initiative motivated not just by a speculative commercial imperative but by a desire to highlight the slowly improving condition of Glasgow’s poorest residents. The title of the work suggests architecture was the principal subject but the photographs are teaming with life, full of men, women and children. Annan’s photographs give us a privileged insight into the living conditions of our forebears as no other city, with the possible exception of Paris, has a comparable archive from such an early period in the history of photography. - Frank McElhinney