Through a Foreign Glass: The Art and Science of Photography in Late Qing China 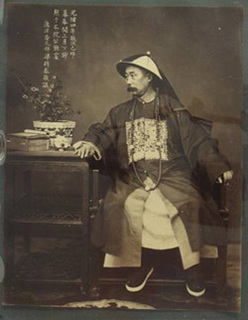 Brought to Asia in the early 1840s by Europeans, photography was both a witness to the dramatic changes that took place in China from the second half of the 19th century through the early 20th century and a catalyst to further modernization. This talk will outline how the medium of photography was readily adopted by Chinese export painters, who learned the mystery of the new technology and practiced it alongside their traditional training. Among other examples, the talk will illustrate the work of the Tung Hing studio (active 1870s), which captured the essence of Chinese landscape painting in its photographs of Fuzhou and the river Min or the distinctive work of See Tay (active 1870s and 1880s), who created a new hybrid aesthetic in which literati conventions were blended with the reproductive medium of photography.

Unfortunately, the talk by Dr. Frances Terpak (Curator of photographs at the Getty Research Institute and coauthor of the award-winning Devices of Wonder: From the World in a Box to Images on a Screen (Getty Publications, 2001), and co-editor of Brush and Shutter: Early Photography in China (Getty Publications and Hong Kong University Press, 2011)) is on tomorrow 9th Feb 2011 at UCLA! Sorry for the late notice, but details of the talk can be found here.