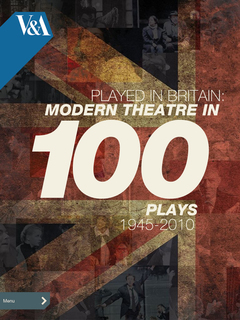 Following the death of photographer, Douglas H Jeffery, in 2009, the V&A has acquired his whole collection of theatre photography, dating back to the 1950s and comprises more than 100,000 images from around 30,000 productions. A selection of his photographs has also been included in this newly-launched app that aims to examine the history of theatre in Britain from 1945 to 2010. Presenting a fascinating overview of British theatre, each play is accompanied by an original essay summarising its plot, impact and legacy and features material from the V&A’s vast Theatre & Performance collection.

It is available for free in the museum’s theatre and performance galleries and its study room at Blythe House, and can also be downloaded for £7.99 from the iTunes app store for use with an iPad.