Photograph of the Valley of Inkerman. In the valley in the foreground there is a road to the right and a river in the distance to the left. Behind are steep cliffs with a row of huts near the base. The Battle of Inkerman was fought in this valley on the 5th November 1854.

However, the Battle of Inkerman was not fought in the valley shown as the above RCT description suggests. Most of the fighting took place on the heights seen in the background of the image. I can also add that the road in the right foreground was the Post Road 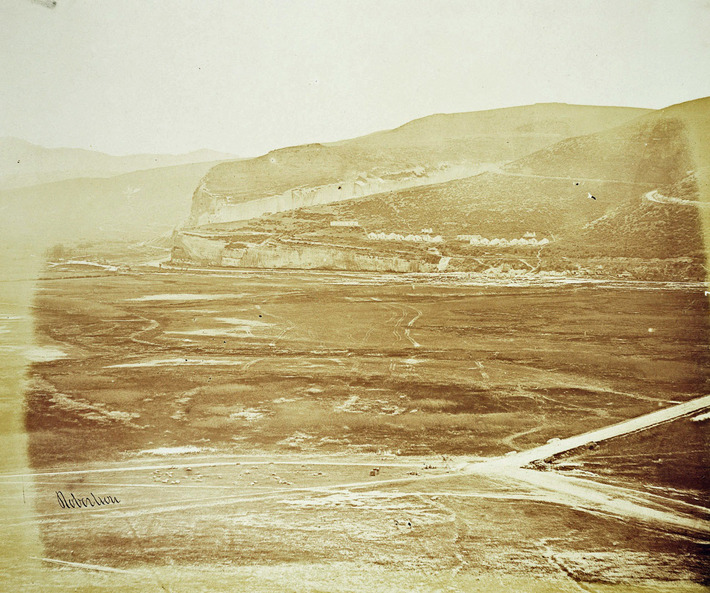 to Sevastopol that ran along a causeway that crossed marshland to reach the Inkerman Bridge over the River Chernaya. This river is the water course seen at the base of the cliffs in the middle distance. It was along this road that part of the Russian Army marched on 5 November 1854 to cross the bridge, scale the Inkerman Ridge and join the Battle of Inkerman. The Post Road is again seen on the hillside on the right climbing up the slope from the Inkerman Bridge. It disappears as it turns to the right around the East Jut spur into Quarry Ravine. Obliquely ascending the side of the Quarry Ravine, this Post Road eventually reached the Inkerman Ridge where it traversed the Inkerman battlefield. The spur of high ground seen at the centre of the image beyond Quarry Ravine was known as the Inkerman Tusk with Kitspur and the Fore Ridge on the higher hills behind. All these elevated locations were scenes of fierce fighting during the battle.

To take the image, the photographer stood on a spur of high ground on the eastern side of the Chernaya Valley that was Russian territory before the armistice of April 1856. This location shows that it was taken during Robertson/Beato’s second visit to the Crimea in 1856 as the area was out of bounds to the Allies before the cessation of fighting. Although signed by James Robertson, Felice Beato, who is believed to have been more active than Robertson in their 1856 visit to the Crimea, was most likely the photographer.

The photograph forms a panorama with another image, which is also entitled Valley of Inkerman, by the same photographer (see below). This image, which suffers from the effects of time, shows the eastern side of the Chernaya Valley with the western slopes of the Mackenzie Heights on the left.  The remains of Kalamita Castle, also known as the 'Ruins of Inkerman', lie on the rocky shelf at centre. The rock caves of Inkerman were and are still found in the cliff that drops to the valley floor at centre. 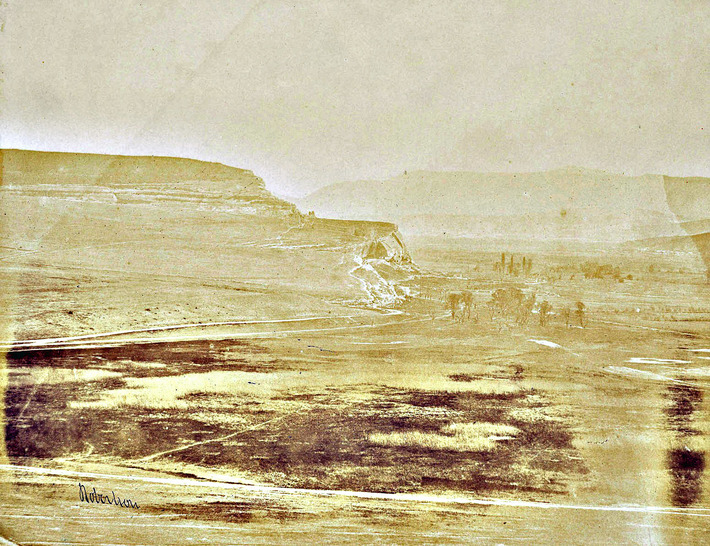 In 2012, the author visited the spur from the Mackenzie Heights where the two photographs presented above were taken and took his own panorama from roughly the same position (see below). This shows how the swamp in the foreground of the Crimean War images has been dredged to provide a harbour at the eastern end of Sevastopol’s roadstead. The ruins of Kalamita Castle are still to be found on the shelf of land on the left and today's main road climbs up the same route as the old Post Road on the side of the East Jut spur on the right. However, the area is now much more developed than it was in 1856.

Wishing all those interested in the photography of the Crimean War a Merry Xmas and a Happy New Year!