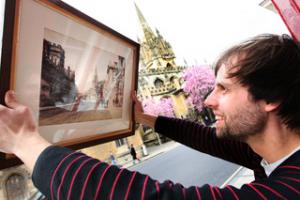 The Oxford Mail reports of an exhibition of rare original prints of images taken in Oxford by Victorian photographer Henry Taunt. More than 130 pictures from the 1850s to 1900s by Taunt and other early photographers are on show at Sanders of Oxford in High Street. They depict university buildings, parks and cobbled streets, with scenes include the Ashmolean Museum, Magdalen Tower and the view from Folly Bridge.

Gallery manager Phil Marston said: “It’s very interesting to see how little Oxford has changed since the Victorian times. Henry Taunt was born in St Ebbe’s in 1842 and became a professional photographer capturing hundreds of images of Victorian Oxford and the surrounding area. He was also responsible for producing a pioneering pocket guide with photographs of the River Thames. He was considered at the cutting edge of photography for his skilful use of tents, tripods. He was also hailed for using water to instantly develop images.

Photo:  Phil Marston, of Sanders of Oxford, with a photograph of High Street in the 19th century.