Because of the facial expressions of some soldiers photographed by Roger Fenton in 1855 during the Crimean War, it was suggested by Richard Pare in the 2004 book All the Mighty World that they may have been suffering from what we now call shell-shock. Pare drew particular attention to Fenton’s portrait of Captain Lord Balgonie (see below). In the picture, Balgonie is said to look older than his 23 years and has what have been called haunted eyes with a distant stare (see right).

In 2015, a review of an exhibition of salt prints in the Tate Gallery in Culture Whisper contained the sentence ‘Photography ….. enabled Roger Fenton to capture the shattered and shell-shocked look of soldiers in the Crimean War’. The Balgonie portrait has been described by Taylor Downing in his 2016 book entitled Breakdown: The Crisis of Shell Shock on the Somme as the ‘face of shell shock’. In addition, Sophie Gordon in 2017 in Shadows of War regarded the portrait as a ‘tragic depiction’ of Balgonie, who she described as looking dishevelled, unfocused and appearing to suffer from shell shock.

People photographed by Fenton usually had sombre expressions and often looked into the distance away from the camera. Captain Henry Verschoyle, who was a Grenadier Guards hero, was also captured by Fenton with a similar look in his eyes. To me, Balgonie looks tired. He could also have been suffering from an ailment caught during the harsh Crimean winter of 1854-55. He appears no more ‘dishevelled’ than many others photographed at the time by Fenton. Hair was worn long by many in those days and Balgonie had probably just got off his house after riding to Fenton’s make-shift studio in Balaklava.

In a letter home in April 1855, Fenton reported that ‘My hut seems to be the rendezvous of all the Colonels and Captains in the army, everybody drops in every day and I can scarcely get time to work for questions nor eat for work’. It seems to me that Balgonie may have dropped in on Fenton like many of his contemporaries. Shell shock is a term used for those who break down under the stress of war and I doubt if a broken man would go to Fenton’s hut out of curiosity to see what went on there and to have his portrait taken?

Balgonie was born in 1831 and served in the Grenadier Guards in Crimea. He was present at the major battles of the Alma, Balaklava and Inkerman in 1854. His obituary in the Dundee, Perth and Cupar Advertiser on 4 September 1857 reads:

He might have returned home with perfect honour long before the close of the Crimean campaign - many a stronger but less chivalrous and less sensitively honourable man did so – but he resolutely remained at his post till the downfall of Sebastopol although there is little doubt that his doing so, amid all the hardships and exposure of camp life must have implanted or at least fostered in his constitution, naturally delicate, the seeds of that disease which has prematurely ended a career so hopefully and auspiciously begun. Lord Balgonie, in the autumn 1855, returned to Melville House, the family residence in this county, laden with honours. He had gained all the Crimean medals except Kinburn besides that of the French Legion of Honour. He took ill in a few days after reaching home, and his life has been little more than an alteration of partial recoveries and relapses ever since, all borne with a serenity and patience truly wonderful. Last winter his Lordship went to Egypt in the hope of gaining that improvement in health denied to him in his own country, but the season proved unpropitious there, and in May last he returned to England weaker and more prostrated than he had left it. From that period he gradually sunk until Saturday last, when his solemn change came. In the full flush of autumn beauty, gently and happily he died………

The above mentions that Balgonie was awarded medals for his service in the Crimea and stayed on until after Sevastopol had fallen. It is also known that he undertook the mentally demanding role of an aide-de–camp to General Bentinck, which would have been impossible for him to carry out if he was a broken man. The obituary notes that Balgonie had a weak constitution and implies that he died young because he was worn out by the hardships and privations of the Crimean War. His visit to the dry warm climate of Egypt in winter when ill after the war indicates that he may have had respiratory problems, which he could easily have picked up in the Crimea.

In conclusion, I believe that the hypothesis that Balgonie was or may have been shell-shocked when photographed by Fenton in 1855 is just pure unfounded speculation without any basis in fact. Unfortunately, this shell shock interpretation is now in danger of becoming the accepted truth. 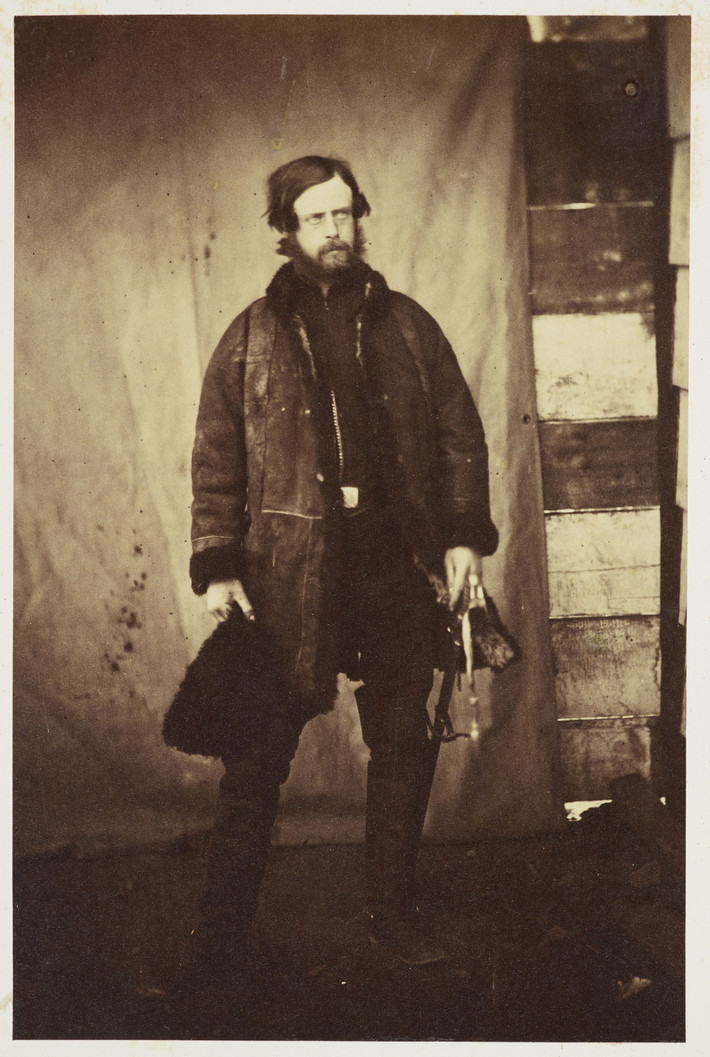