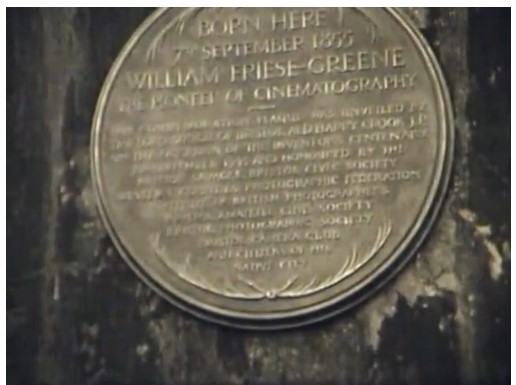 Two events took place last week to commemorate William Friese-Greene. In Bristol a short ceremony was held at the commemorative plaque to WFG in the city and John Winstone talks about it below. The other was an online discussion arranged by the Kennington Bioscope and the Cinema Museum with Ian Christie, Stephen Herbert and Peter Domankiewicz The event was recorded and is available here: https://www.youtube.com/watch?v=62OiHjLlAl4

John Winstone of the Reece Winstone Archive writes the day after the centenary of F-G's death: The last time I stood under the plaque was in 1955, in a schoolboy's striped blazer, when Reece Winstone FRPS had arranged for Lord Mayor Harry Crook (Mr Kleen-eze) to unveil the plaque to F-G on his birthplace behind Bristol Council House and had made a plea that the house be saved from the Council's agenda to demolish. The family thought it prudent to describe Willie as the Pioneer of Cinematography on this more public plaque in the face of a then very recent publication by a photo-historian with ulterior motives denouncing F-G's reputation. Yesterday, at a somewhat poorly attended gathering without any press present, and with representatives of just two of the original seven organisations who had paid for the plaque, but now more optimistic for F-G's place in history I said a few words, looking at the site of the grade II Georgian house, still a car park. My wife and I left a few flowers. F-G's eldest surviving son in 1955, Graham, an artist in architectural metalwork, had made the bronze plaque. Now bereft of its green patina,  doubtless a result of Bristol's polluted air, the plaque is in need of conservation (if only the HLF would consider more carefully when awarding grant related to cinematography!).

The two of us moved up to St George's church, Brandon Hill, now a music venue. Here beneath the gallery F-G's second 1955 plaque by Graham is affixed, funded by the Old Boys of F-G's charity school, QEH. We left a posy from the rest of the flowers. This plaque, which speaks in the privacy of F-G's church and where he married Helene Friese, makes the assertion the Inventor of Cinematography, just as Reece had dared to describe him in his speech at the unveiling of the birthplace plaque,

A short film of the 1955 unveiling is now on our website to view at www.reecewinstone.co.uk.