As a group of specialist workmen refurbish part of the historic Manor House at Mount Grace Priory, near Northallerton, North Yorkshire, it was reported today that a photograph showing some of the original skilled workers has been donated by an anonymous visitor. The current work at the Manor House is part of a £150,000 project by English Heritage to restore two rooms, which were given an Arts and Crafts make over in the 1890s.

Now a photograph dating to the time of the works has emerged, offering the conservationists a window on the past. The picture was handed in anonymously by a local man who found it in an old drawer and shows artisan workmen who were employed by Priory owner, Sir Lowthian Bell.

The English Heritage custodian at Mount Grace Priory, Becky Wright, said: "There are more than 20 workmen shown in the photo, and that's
just about same number of people we have today reviving the two rooms. They played a big part in preserving the priory and we would be very interested to learn if anyone recognises any of them." 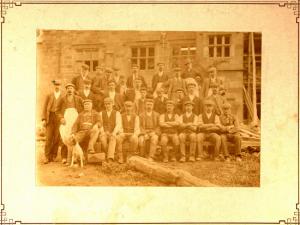 The original workers, circa 1890s, who restored the Manor House inspired by the Arts and Crafts movement