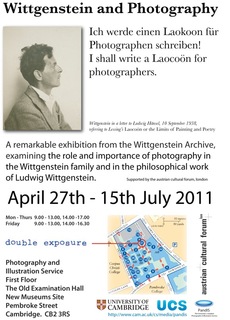 Wittgenstein had a great interest in photography. In his writings there are numerous references to photography, which he uses to illustrate and clarify his arguments. He himself was a keen photographer and in the 1930s he created his own photo album. During his time as a primary school teacher and architect he carried out a number of photographic experiments together with his sisters and the court photographer Moritz Nähr, a friend of the family. Some of them are closely related to his philosophical work, for instance his experiment based on Francis Galton's composite photography, from which Wittgenstein subsequently developed his concepts of 'language game' and 'family resemblance'.

Ludwig Josef Johann Wittgenstein was born in Vienna, at one of the summer residences of the family on the outskirts of Vienna, in Neuwaldegg, on 26 April 1889. This exhibition marks the 60th Anniversary of his death in Cambridge on 29 April 1951.

If interested, details of this exhibition can be found here, with a news article here.