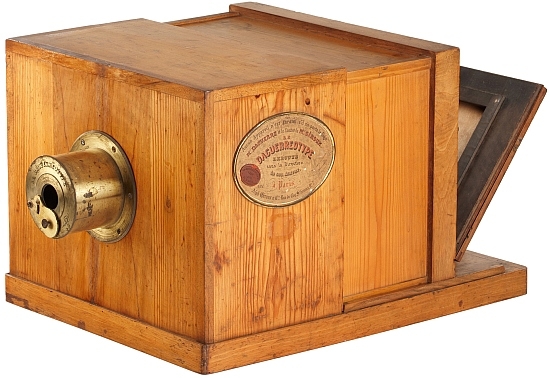 WestLicht Photographica (http://www.westlicht-auction.com) is to auction off one of the first commercially produced cameras, a Giroux Daguerréotype, which is expected to fetch at least half a million euros. The Giroux Daguerréotype was made in Paris from 1839 in limited numbers from original plans drawn up by its inventor, Louis Jacques Mandé Daguerre, by his brother-in-law, Alphones Giroux. The camera being auctioned on 29 May by WestLicht Auctions in Vienna was completely unknown and has never before been documented. It has been in private ownership in northern Germany for generations. The outstanding original condition of the 170 year-old apparatus is remarkable. Every detail including the lens, the plaque signed by Daguerre himself, the black velvet interior and the ground-glass screen are in their original state. WestLicht Photographica estimates that it will be sold for 500,000 to 700,000 euros at the 17th WestLicht Photographica Auction held in Vienna on 29 May 2009.

The “Giroux Daguerréotype” is the first commercially-produced camera in the world and represents the initial spark that began the worldwide spread of photography. It was made in Paris from 1839 in limited numbers from original plans drawn up by its inventor, Louis Jacques Mandé Daguerre, by his brother-in-law, Alphones Giroux.

The camera being auctioned on the 29th of May by WestLicht Auctions in Vienna was completely unknown and has never before been documented. It has been in private ownership in northern Germany for generations. The present owner’s father gave it to him in the 1970s as a present for passing his final apprenticeship test as an optician.

The outstanding original condition of the 170 year-old apparatus is remarkable. Every detail including the lens, the plaque signed by Daguerre himself, the black velvet interior and the ground-glass screen are in their original state.

The unique camera comes with the extremely rare original instructions in German with the title: “Praktische Beschreibung des Daguerreotyp’s”; published by Georg Gropius, Berlin 1839, 12x20cm, 24 pages with 18 illustrations in 5 plates showing the equipment used for producing Daguerreotypes in accordance with Daguerre’s invention. On the back of the little book there are two handwritten notes from 1840 with details of the process.

The expertise has been written by Michel Auer, the internationally renowned expert on historic cameras and author of numerous books. Worldwide, only a few of these cameras are known to exist and all of those are in public museums. A camera like this has never been offered for sale by auction before. It is anticipated that WestLicht Auctions’ own world record price of 576,000 Euros (also for a camera from 1839), will be significantly exceeded. The starting price is Euro 200,000, the estimate Euro 500,000 – 700,000.

The historical background
From the end of the 1820s the industrious stage-set painter and showman Louis Jacques Mandé Daguerre and lithographer Joseph Nicéphore Nièpce have been carrying out joint experiments into a process for making images from a camera obscura permanent. In 1829 they form a company in order to develop this idea but Daguerre achieves the technical breakthrough only after Nièpce’s unexpected death in 1833. He refines the process and, at the end of 1838, finally manages to fix the chemically generated images permanently.
The public first learns of this pioneering invention on the 6th of January 1839 in the daily newspaper “La Gazette de France”. The article reveals almost no details. Thereafter events follow thick and fast. The day after the report is published, physicist and politician Francoise Jean Arago makes a fiery speech in which he declares Daguerre’s invention to be too important to be the concern of a single person and proposes that the French nation should make the invention of photography a present to the world.

The Chamber of Deputies in Paris enthusiastically accepts this idea and Daguerre and Isidor Nièpce, the son of his former partner, are awarded a life-long pension of 10,000 Francs per year in return. On the 19th of August 1839 the secret of the new process is revealed stimulating world-wide interest.

The news spreads like wildfire and on the 24th of August, punctually for the public announcement, the first advertisement for the Daguerreotype made by Alphonse Giroux et Cie is printed in the “Journal des Débats”. The announcement explicitly draws attention to the fact that production will be supervised by Daguerre himself and the reader is informed of the brochure which contains a detailed description of the process.

The booklet, which will soon be printed in numerous languages and will go through 32 editions, also contains precise plans of the camera developed by Daguerre.

Since the French nation has compensated him for his invention, Daguerre no longer has the exclusive rights to it but, as a good businessman, he finds ways of making money out of his name which is now famous all over the world. On the 22nd of June 1839, two months before the process was made public, he already signed a contract with Alphonse Giroux and the Susse Brothers. (Incidentally, an original Susse Frères camera was auctioned by WestLicht Auctions in 2007 for 576,000 Euros). In the contracts the two companies were given the exclusive rights to produce and sell the Daguerreotype and the other equipment necessary.

The famous optician Charles Chevalier expressed his disappointment at this agreement because he had been hoping to acquire it. After all, it had been Chevalier who had made the contact between Daguerre and Nièpce in 1826 and he had also been following their experiments over the years. In his biography the respected producer of scientific instruments commented on the choice of an interior decorator and a stationer for the production of the Daguerreotype with ridicule and a certain degree of annoyance. Despite (and because of) that position Chevalier was given the commission of producing the lenses for the cameras made by both companies.

The cameras produced by Daguerre’s brother-in-law are more opulently finished than those of the competition. Every Giroux camera has a golden plaque which, in addition to the maker’s mark, bears Daguerre’s personal signature. The selling price of 400 Francs was very high, representing approximately annual income of a normal working man. Under the terms of the contract Giroux was to have half the profits, Daguerre and Niépce taking equal shares of the remainder.

There is no record of the total number of cameras that Giroux produced but since cheaper and improved cameras came onto the market relatively quickly, it is assumed that the numbers were very limited. It can also be assumed that the Giroux Daguerreotype was only produced in 1839. Apparently Daguerre did not take the development of his camera any further. The inventor died in 1851 at the height of his worldwide fame.
On the functioning of the camera and the process

Making Daguerreotypes is a relatively involved process. Since the photographer has to ensure the light sensitivity of every photograph, he needs to have a lot of equipment with him. For open-air shots he must also carry a darkroom. For this reason the Daguerreotype was originally sold with everything necessary for the production of Daguerreotypes. All in all the required equipment weighed around 50 kilos and included in addition to the camera itself, fuming and mercury boxes, a spirit burner as well as the silver-covered copper plates and the necessary chemicals.

The camera itself consists of two boxes which are slide into each other and are made of different kinds of wood. The larger of the two, which has the lens attached to it, is fixed to the base plate. The back of the smaller box is either the ground glass plate or the holder insert and it fits into the forward box so that the whole is lightproof. The interior is lined with black velvet. In order to bring the image into focus the rear box is moved back or forwards along the wooden camera base.

It can then be fixed in position by means of a brass screw. A fold-out mirror behind the ground-glass screen allows the image to be seen while standing upright.

Initially Daguerre used plates of pure silver. Later, to save costs, they were made of silver-plated copper. Before the exposure was made the plates were fumed with iodine or bromine. This took place in a special wooden box with the aid of a spirit burner. Under the influence of this fuming process, light-sensitive silver iodide formed on the surface of the plate.

In order to maximise the brightness of the image while focussing, the lens’s outer brass fitting was removed. During the exposure the ground glass screen was exchanged for the (now) light sensitive plate (167 x 216 mm). Before the exposure was made the diaphragm was replaced and a swivelling cap served as a shutter. Daguerre suggested exposure times of between 3 and 30 minutes, depending on light conditions.

After the plate was exposed, the photograph was developed with the aid of mercury fumes which adhered to the surface producing a very faint silver image. Development and fixation in a salt or cyanide solution results in a positive image made of grey quicksilver. The tonality of the original pictures varied between grey and blue-grey but, after the introduction of gold toner, they could also be gold, purple or sepia-coloured.

Daguerreotypes are astoundingly finely nuanced and practically grainless – even when examined under a magnifying glass they exhibit very fine details. When they are framed in a way that excludes air they are extremely durable. Daguerreotypes are always unique and cannot be reproduced. This is also one of the reasons why they are such sought after and desirable collectors’ items nowadays.