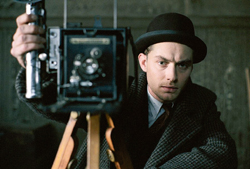 Susan Meiselas: In History, edited by Kristen Lubben, and Photography and Cinema by David Campany have won the 2009 And/or Book Awards, the UK’s leading prizes for books published in the fields of photography and the moving image. Acclaimed British film director Terence Davies announced the winners during an awards ceremony at the BFI Southbank on Thursday 23 April. Each author received a £5,000 prize cheque from the Krazsna-Krausz Foundation, the charitable organisation which runs the awards.

Over 150 titles published in 2008 were submitted for the awards across the two categories. The winners were chosen from two shortlists, by judging panels chaired by Magnum photographer Martin Parr (Photography) and film director Mike Dibb (Moving Image). The judges were looking for books which make a significant contribution to the understanding of photography and/or the moving image, and which use photographs as more than a means of illustration.

Susan Meiselas: In History edited by Kristen Lubben (Steidl)
Martin Parr comments: “Susan Meiselas has had a long and distinguished career in photography. One of her unique qualities is her determination to understand and use the process of photography. Her work not only shows a great eye, but demonstrates how she has engaged with the subject and considered the consequences and applications of her work. All these activities and images are brought together in this one remarkable book.”

Susan Meiselas: In History (Steidl) is a tribute to the prestigious career of the American Magnum photographer and her invaluable contribution to debates around the ethics of her documentary practice. Based around an extended interview it is illustrated with full page photographs, contact sheets, notes and critical essays.

In clear and thought provoking prose, with eclectic illustrations, Photography and Cinema assembles a missing history in which photography and cinema have been each other’s muse and inspiration for over a century. Campany, a Reader in Photography at the University of Westminster, was presented with his prize by Terence Davies on the night of the awards.

Shortlists
The shortlisted titles for the 2009 And/or Photography Book Award were:

The shortlisted titles for the 2009 And/or Moving Image Book Award were:
Photography and Cinema by David Campany (Reaktion Books)
Fight Pictures: A History of Boxing and the Early Cinema by Dan Streible (University of California Press)
Performing Illusions: Cinema, Special Effects and the Virtual Actor by Dan North (Wallflower Press)