Accompanying the lot is a  Zeiss Distagon 50mm f/4 lens; a tripod; a number of accessories including filters; lightmetres; and a black Nikkormat camera with four interchangeable lenses; all housed in an aluminium camera case labelled IAIN MACMILLAN, and accompanied by a black and white photograph of Iain with the Hasselblad camera around his neck.  It is estimated at £2000-2500.

The lot is offered by the Iain Macmillan Archive.  Having met John Lennon at the Indica Gallery with Yoko Ono in 1966, Lennon later invited Macmillan to photograph the Beatles for the cover of their final album 'Abbey Road'. Given the Beatles recorded most of their music at the EMI Studios on Abbey Road, St John's Wood, London, they decided to name their last album after the road. Armed with a sketch Paul McCartney had given him a couple of days before of what the picture should look like, Iain knew he didn't have long to get the right shot for the world's most famous band.

On 8th August 1969, at around 11:30 am, a hired policeman stopped the traffic, Iain climbed up a large stepladder in the middle of Abbey Road and took just six pictures of the Beatles crossing the street. In approx 10 minutes Iain shot the band in various orders, but it was frame no.5 that was used for the cover of the album - the only photo where all four of them are striding in perfect formation. 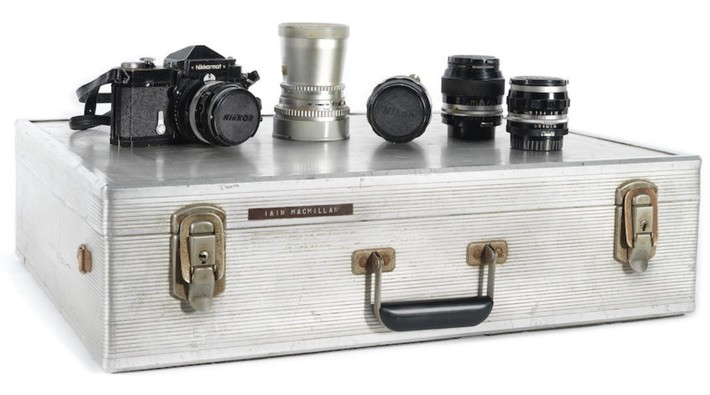