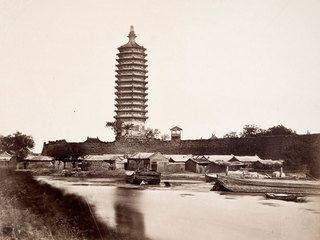 Lawrences of Crewkerne is to offer an important Felice Beato album on 31 January 2014. The album contains 68 albumen prints of China and Japan, including views of North Peiho Fort, the Emperor's Palace and the Summer Palace, Peking, Hong Kong, Yedo and Yokohama, the first leaf signed in margin (vertically), 'No. 20 F. Beato', and a further ownership inscription, 'Capt. Dew, R.N. 1863' on endpaper, the majority of prints captioned in pencil on the mount, the majority mounted one per page, some damp-staining to upper margin, rarely affecting prints,contemporary soft boards of Japanese cloth, worn, 47 x 37 cm approx., c.1863-4. It is estimated at £50,000-70,000

Provenance: Purchased from the photographer by Capt Roderick Dew, R.N. in 1863-64, thence by descent.

If you wish to examine this lot, viewing will be available at The Japanese Gallery, 66 Kensington Church Street, London W8 4BY on the 20th and 21st January 2014 between 10.00am and 5.00pm. Please ring Lawrences for further details. 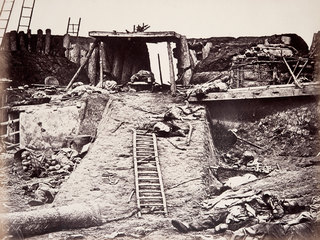 Albums by Felice Beato that contain prints of both China and Japan are very rare. This example offers 23 views of China and 34 views of Japan, including 11 folding panoramas (inc. Hong Kong harbour, the aftermath of battle at the North Taku Fort, views of Yokohama, Yedo, etc.), 8 further prints of drawings by C. Wirgman and 3 portrait studies that include a PORTRAIT OF THE PURCHASER, CAPT. RODERICK DEW.

Felice Beato moved to Japan in 1863, placing this album among the very first his studio produced there. It seems likely that the purchaser, Capt. Roderick Dew, selected the prints personally, as they would seem to reflect his own military interests. In later albums, Beato preferred to select the content himself. 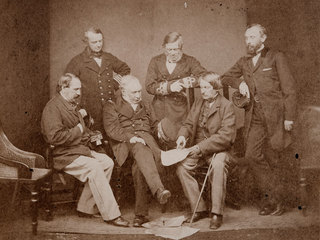 In May 1859, as part of a naval force under the Command of Sir James Hope, Dew participated in an attack on the North Taku Fort as Commander of HMS Nimrod. In a personal letter to an unknown recipient - apparently written from within the Peiho Fort - he describes the engagement, ‘At 10am yesterday we attacked the forts. Cormorant led on in splendid style for the North Forts & had almost passed the forts when the whole Chinese line of batteries opened - we weighed our anchor to advance into position amid a fearful hail of balls, all as luck would have it passing over … after the anchor was up we had to steam some distance before our guns would bear & then 6 shells plumped right into the Southern forts & exploded…’. He goes on to describe the destruction of the forts in some detail, ‘…I saw the poor devils carried out in a fearful state - many naked and quite black - the same in the forts I have not time to describe … the huge brass guns tumbled about + dented laying in a chaotic state amongst the debris of the earth works the dying and the dead…’ (ALS written Friday May 21 [1859], 5’ inside Pieho. Private collection).

In September 1859 Dew was appointed Captain of HMS Encounter. In 1862 Admiral Sir James Hope instructed Dew to proceed to Ningbo, now occupied by Taiping rebels who posed a threat to the Qing Dynasty and to British trade. After the failure of negotiations, Dew led a coalition of Chinese Imperial Troops, British and French forces in an attack on Ningbo. Running ladders against the ramparts, the first attempt was aborted due to a fierce enemy response. When a second attempt was made with the ladders, ‘…Kennedy, the first on his, was shot through the lungs; David Davis, who was foremost on the next, was shot through the head as, revolver in mouth, he topped the wall; and so Captain Dew himself was the first to gain a position on the rampart, which was soon passed by the greater part of his force…’. Subsequent to the success of this action, Captain Dew pushed forward to secure a large part of the surrounding region. Writing to Lucy Amphlett, he describes the scene, ‘Since we took Ningbo I have had one or two little brushes with them, + I firmly believe I have saved the lives + properties of some 100000 men women + children. Black smoke up country told us that the Rebels were at their old games. I went up the river in one of our gunboats … for ten miles the banks were one huge well-cultivated garden studded with villages. Suddenly on turning a corner of the river we came upon some 5000 rebels plundering + murdering … a few rounds of grape + shell sent the Army scampering up the hills + the people returned to their houses which in another ten minutes would have been burnt…’ (ALS from the Encounter May 27/62, Ningbo. Private collection).

After a successful series of actions that restored Imperial rule to the area, around April 1863 Dew and the HMS Encounter left for Yokohama, Japan. He was stationed there protecting British interests until early in 1864, when he left for Plymouth. It seems likely that he met Felice Beato during this period and compiled the present album as a record of his military service in China and Japan.

For his actions in the liberation of Ningbo - described at the time as ‘by far the best thing of the kind done either in China or elsewhere since the peace of 1815’ - Capt. Dew was recommended for the Victoria Cross and was awarded the Companion of the Order of Bath. In March 1865 he also received a Gold Medal of Merit from the Emperor of China, ‘…for his bravery and vigour when in command of the Imperial Troops, and those of England and France, at the capture of Ningbo, and the subsequent recovery from the Tai-Pings of the entire province of Che Kiang…’ He died in Lisbon on March 24th 1869, while in Command of HMS Northumberland