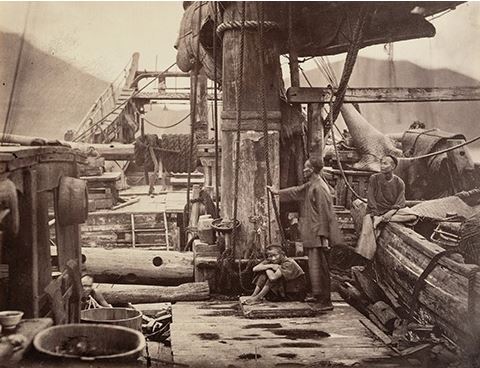 Thomson was one of the first to extensively document the Far East, photographing there between 1862 and 1872, before returning to the UK and producing, in association with Adolphe Smith, the seminal and pioneering documentary photography book, Street Life in London (1876-77). Thomson published many of his images of China, Thailand and Cambodia in a series of books, often using actual photographs in the publications, making them costly small printings, and now all consequently rare. Most well-known is his four-volume work Illustrations of China and Its People. A Series of Two Hundred Photographs, published in 4 volumes (1873-74). The wide body of images in that work are reproduced as photogravures and so these fine images and the books are generally found in good condition.

More difficult to find in fine condition are the books published with mounted original photographs, of which the earliest, The Antiquities of Cambodia (1867), with 16 albumen prints, is the most familiar. Of Thomson's China books with real photographs, Foochow and the River Min (1873) with 80 carbon prints is the best known, even though only published in limited edition of 46 copies; the last complete copy at auction fetched £350,000 at Sotheby's, London, in 2012.

Rarest of all is Thomson's first China photography book, Views on the North River (1870), with 14 mounted albumen prints. On this expedition into the Guangdong province the weather was poor and Thomson was disappointed with his photographs. There are only four copies of this book known: at Hong Kong University, the National Library of Scotland, Cornell University, and one privately owned in North America. No copies have ever been offered for sale. The auction will offer a newly discovered fifth copy, held for 150 years in a private British family's possession, alongside four further related photograph albums of the 1860s/70s: views of Hong Kong by John Thomson, circa 1868; view of Hong Kong by William Floyd Pryor, circa 1870; and two albums of views of Hong Kong, China, India and Burma. The sale will also comprise further 19th-century Asian and other travel photography, both as individual prints and albums from various sources.