Having just joined the British Photographic History Group, I would like to take this opportunity to introduce myself and the research that I am carrying out. My name is Peter Norman, I am a Technician working at the National Portrait Gallery in London and I am looking to develop a workable method to reproduce the Lumiere Autochrome colour process. Over the past year I have been learning the Silver Gelatin Bromide technique as well as producing the coloured starch mosaic that is integral to this process (see image). I have recently appeared in the BBC documentary, 'Olive Edis: Fisherman to Kings' explaining how the Autochrome works and the research that I am doing. Further to this I would like to make contact via this page with those who are interested in following my work and who have knowledge of the Autochrome process. Please feel free to post comments and here is a link to my instagram page. https://www.instagram.com/theautochromeproject/ 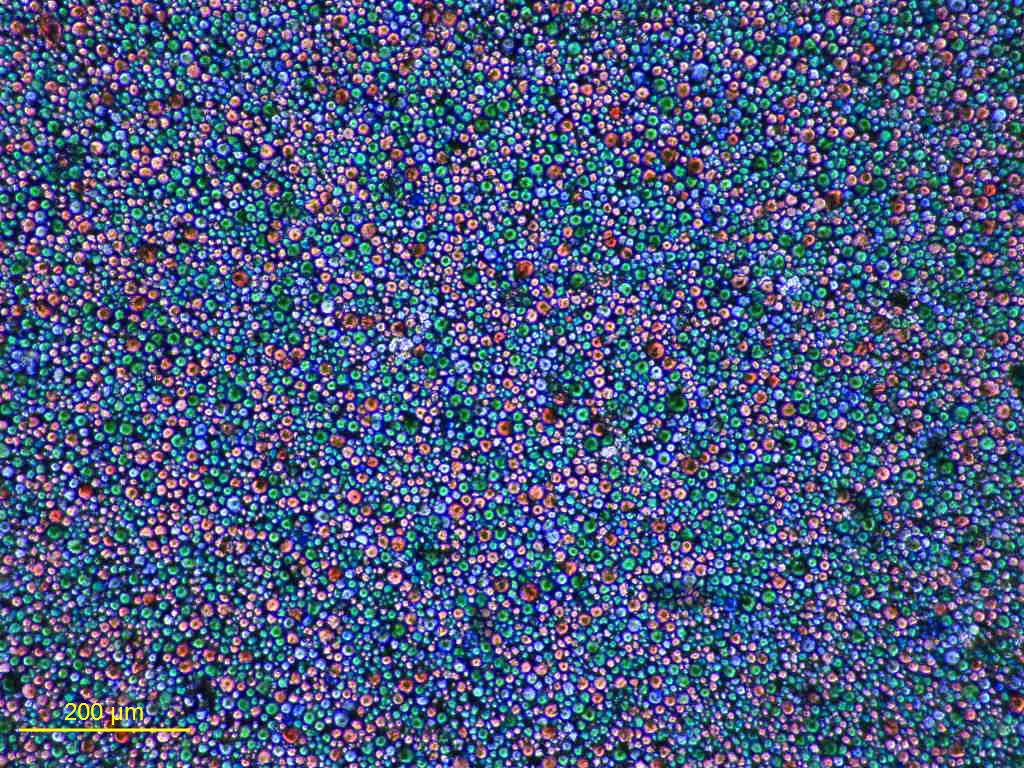 It might be worth contacting Bertrand Lavedrine (lavedrin@mnhn.fr) & Jean-Paul Gandolfo (jp.gandolfo@ens-louis-lumiere.fr) who wrote the book on Autochrormes &, I am sure, may have more unpublished material.

Much of the research for their book was done in the RPS Library in Bath in the late 80s/early 90s when they made annual visits from Paris lasting a week at a time.  They reckoned the RPS had runs of periodicals and publications on both the Autochrome and early colour photography impossible to find elsewhere.

I will definitely keep in touch. My email is petern079@hotmail.com

Thanks. I am not familiar with Mons. Lavedrine but I will check out his work. I have worked with the Getty and Art Kaplan and Dusan Stulik, before he retired.

It's exciting to see folks like yourself, the Getty, and the Ransom Center in Tucson researching the early photographic processes and especially the Getty who is actually researching in the laboratory.

Email me at any time if you think I can be of any assistance. richsul@earthlink.net

And thanks to Michael Pritchard for this forum!

You might be interested in the work of Bernard Lavedrine who works for the Getty. He did a book about it where a lot of info comes from. He mentions a guy called Frederic Mocellin (I may have that wrong) but the method he used was coating starch onto polyester and overlapping it on ilford fp4 I believe. However I ll be going a bit further with making hand made emulsions, colour sensitising them and hopefully combining it with the mosaic. It is very much a long term project but this ultimately is what inspires me about it. My recipe will be different to some extent but perhaps an exciting derivative.

I suspect you have gone further than anyone else in the modern era in pursuit of the illusive wisp. Your comments about this being an "industrial' process is on target, I like that approach.

You appear to be in possession of some knowledge about how the Lumiers produced the plates. What you know is fascinating.

I am not aware of what a starch grain vacuole is.

If I were trying to get an even coating of grains of a size range why not try an aquatint type of dusting? Just asking. The heavy drop first the light last so with timing you could get a specific size range but perhaps even size particles are not needed, or even not wanted as random sizes might work better.

The problem with trade secrets in an industrial setting is that it is industrial and lots of people know.

The windscreen wiper bit is interesting for a number of reasons. For one, were they using multiple passes and getting compression of the grains or just doing one pass? I would have suspected that glass would have taken the pressure needed to compress the grains but working down at that "nano" level the mechanical issues might be quite different that one would imagine.

Of course, the way they did it may not have been the most logical. often folks would figure out how to make something work by using the tools at hand. And as the old saying goes, "If it works, don't fix it."

The more we can learn of these early processes the better the conservation will be. One thing that stands out is the use of rubber. Normally that would spell disaster, at least in my mind, but in combo with damar it might be quite different.

Early color processes are quite interesting and some of the books in the biblio I posted, (the books are there for downloading,) have some rich ideas for further instigation.

Thank you for your comments and questions as well as the link to your Colour bibliography. The Lumieres did indeed keep the process secret obviously to lead in the market of colour photography. The way the starch grains were applied was through initially coating the glass plates in a varnish that contained damar resin and rubber dissolved in benzene. Whilst the plate was slightly tacky, the dyed starch would be dusted on using brush rollers. The starch will fall onto the plate, perhaps clumping in areas of their individual colour but largely there will be gaps, known as interstitial spaces. These have to be 'filled' otherwise what happens is the colour is completely lost and you just end up with a very faded image. The spaces must be filled in with lampblack or carbon to stop this from happening. Now the really interesting part, in order to make the starch more transparent, it had to be rolled. Obviously putting glass through a roller would crack it so the Lumieres developed a burnishing machine. They basically took an industrial wood thicknesses and put a swivel head on it that held a tempered steel rod that polished the plates like a wind screen wiper. Once this has been done the silver gelatin emulsion is put on.

Now in regards to the screen that you see in the image, I did this recently using dyed tapioca starch instead of potato as it is more within the grain size needed. Why the Lumieres chose potato is most likely due to the fact that their business was close to a dextrin manufacturer, it was roughly what they needed and they were cheap. The prob In the image I made it was for a test. The grains were sifted through a 15 micron mesh, so obviously the smallest were left in. I would need to sift these out for the trial stage. Instead of using a varnish, I have used a double sided adhesive and dusted the starch on. The spaces are filled with lamp black and then rinsed with several coats of talc powder. The adhesive layer is then compressed. It can then be placed onto the glass without a risk of damage.

I can well believe that those who have tried have probably given up through lack of information, it does seem to be the 'will o the wisp' of historical processes that photographers would like to crack. However let's not forget that this was an industrial process so it has be broken down into manageable parts and this is what I am doing.

In response to your question about the black dot in the starch, I think you mean it's 'vacuole'? Under further magnification this is more noticeable. Starch molecules are quite fascinating in themselves. I hope this information is of interest to you.

After a second look I see what looks like a dark spot on the top of each, what looks o be spherical, grain. If the grains are spherical, or were to begin with, it seems unlikely they all landed with the dark spot up. Highly unlikely!

So, we have to explain that phenomenon. Is is an aberration of the photograph? That too is unlikely as it does appear to be well done with modern equipment.  It's a bit of a mystery but my guess is it is due to the flattening of the grains and some kind of dimpling effect. Possibly due to outward force on the grains the midsection of the grain while compressing the tops. Perhaps like the are where the stem of an apple is.

Physically the arrangement is amazing. A question: are the grains that different in size?  Possibly, but I don't think so. The smaller ones seem to be below the bigger one indicating  they are not coated in one layer of grains but a multi-layer. And! the small ones do not have the dark dimple, only the bigger ones. So the coated several layers of grains, perhaps only two or three and them flattened the layers slightly squishing them enough to fill in gaps and smooth the surface.

So what I think they did rather than the common assumption that they coated flattened grains but coated several layers and flattened the layer somewhat to fill gaps and even out the surface a bit.

As best as I have been able to determine, the Lumier's never patented the process and kept it as a trade secret. I've not found any patents directly applying to the process itself.

The G. Johnson book has some good information and the ive's patents should help some.

Over the last 35 years we had probably 15 to 20 inquiries about how to do the Autochrome process and as far as I know, no one has come close to succeeding. That, of course, does not mean it can't be done because it was done. My suspicion is that the secret is in squishing the starch grains and keeping them separated,

This may have been done by electrically charging them all with the same charge. I also suspect that they grains were spread much the same as how a copper gravure plate was grained with rosin. i. e. Blow into the air -- wait for the heavy ones to fall --insert plate into the stream -- wait a bit -- remove before the light ones come down.. Likely the plate was coated with damp gelatin or albumen to catch the fall of grains.

Interestingly the photo here shows what appears to be rounded grains, not flattened. Perhaps some what flattened which leads me to think a slight flattening, rolling under rollers was done to fill in gaps in the plate. This may be where the common idea that the gains were flattened came from.

--At least that's how I would have done it.

Comment by World Image Trader on August 8, 2017 at 20:45
Not overly happy with my results. So failed partly in patience, partly not being brave enough to fume mercury, and partly for not being wealthy enough to buy silver plates.... and I forgot about all that polishing. Collodion on the other hand is a doddle in comparison. Well the mistakes often add to the authenticity. I expect autochrome process is as frustrating as dags but you can tell me about that in the coming months. All the best WIT

Comment by Peter Norman on August 8, 2017 at 14:12
Hi World Image Trader, thank you for your kind encouragement. I ve tried the Collodian process before as I believe all techniques overlap in their general application and are therefore good to learn. You say you failed at Daguerreotypes ? How so as I think you can only keep learning from each time you do it. Kind regards, Peter