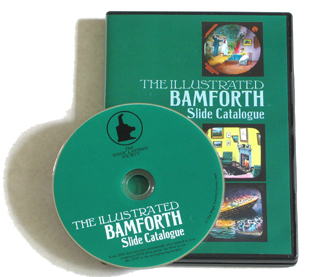 The Magic Lantern Society has launched The Illustrated Bamforth Slide Catalogue a searchable DVD and accompanying booklet which records and illustrates the lantern slide sets of the Bamforth company. James Bamforth and Company was the leading producer of Life Model lantern slide set between 1890 and the early 1900s and the DVD describes 1400 slides listing around 20,000 individual slides of which 4003 are illustrated. The DVD includes reproductions of Bamforth catalogues and slide readings and the booklet gives a wider contextual history of the company and its output.

James Bamforth estanlished his Holmforth photographic studio in 1870 producing portraits and began the production of magic lantern slides in the early 1880s by the late 1890s production had grown to an industrial scale. The firm also co-operated with the Bradford-based Riley Brothers company and after 1902 published an extensive series of postcards. An office was established in New York. The firm also produced cinematograph films. After 1915 the company concentrated on postcard production and in 1918 the film business mnoved to London. The firm ceased to operated in 1993.