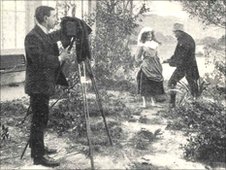 This coming Sunday, BBC's Countryfile programme will focus on the West Yorkshire town of Holmfirth. Located on the A6024 Woodhead Road in the Holme Valley, did you know that this town played a role in the growth of the British film industry in the early part of the 20th century?

It was in 1899 that James Bamforth, creator of saucy seaside postcards, started making films in Holmfirth. In the following 15 years, he shot and produced over 50 films in and around the town - all starring local people. Over a century later, the BBC's Countryfile team has been back to rediscover the man behind the movies. In this documentary a selection of lantern slides, postcards and greetings cards from the Bamforth collection which is held at the Tolson Museum in Huddersfield will be shown.  Bamforth progressed from portrait photography to lantern slides and then films with great commercial success at every stage.

The collection held by Kirklees Museums and Galleries at the Tolson Museum covers all aspects of Bamforth's work.  It ranges from 19th century portrait and landscape photographs to greetings cards from the 1980s. It also includes over 20,000 postcards, 1,500 pieces of original artwork for postcards and greetings cards and hundreds of lantern slides. Though now most famous for saucy seaside postcards, Bamforth worked in a range of styles producing religious song sets, sentimental wartime cards, photographic views and comic photographic postcards. He produced postcards, greetings cards, calendars, lantern slides and, of course, films.

The history of Bamforth's in Holmfirth is revealed on BBC One's Countryfile at 1900 GMT on Sunday 20 February, though I'm sure you can watch it on BBC iPlayer too. The full BBC report can be found here.

Image:  Photography and filming was at the heart of Bamforth's business.