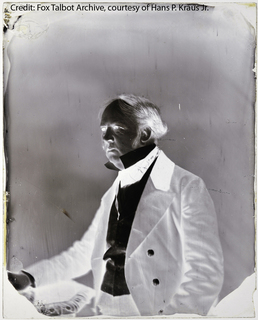 The Bodleian Libraries have been awarded  £1.2 million by the National Heritage Memorial Fund (NHMF) towards the acquisition of the Personal Archive of William Henry Fox Talbot. The only significant Talbot collection remaining in private hands, this important archive is being sold for £2.2 million and the Bodleian Libraries have until the end of February to raise the remaining funds.

Gifts can be made at the following link: http://www.giving.ox.ac.uk/libraries/fox_talbot_archive.html

William Henry Fox Talbot (1800-1877) was one of the greatest polymaths of the Victorian age, and is most famous today for being the British ‘founder of photography’.  The archive contains great potential for fuller understanding of the breadth of Talbot’s scholarly activities, and of the influences exerted by the women in his family, in particular their educative roles, their shared interests in botany, languages, art, travel and history that are so central to Talbot’s work, and their roles as practitioners, supporters, and collectors of the new art.

The collection includes artefacts such as glassware and artworks that Talbot photographed for the ground-breaking publication The Pencil of Nature, the first book illustrated with photographs. There is a strong connection to Oxford, as the archive includes some of the first pictures of the city.

Alongside items related to his pioneering work in photography, the archive also sheds valuable light on his family life, his role managing his estate at Lacock, his life as a Member of Parliament, and his range of intellectual interests from science to ancient languages.

Carole Souter, Chief Executive of NHMF, said:  ‘Considered by many as the’ father of photography’, the impact of William Henry Fox Talbot’s pioneering work is felt daily by all of us whether we are snapping our holidays with a camera or capturing outings on our mobile phones.  This collection offers fascinating new insights into Fox Talbot’s family life, particularly the wonderful contribution made by the women of his family; this is why the Trustees of the National Heritage Memorial Fund felt it was so important that the archive should be secured for future generations to explore.’

Richard Ovenden, Deputy to Bodley’s Librarian said: ‘The archive is an essential resource for scholars on the history of photography, the history of science, and a range of other disciplines. The Bodleian is anxious to ensure that the collection is made available to scholars and to the general public to allow the legacy of this extraordinary innovator and pioneer in photography to continue to inspire new generations of researchers, innovators and photographers. ’

Hiroshi Sugimoto, one of the world’s greatest living photographers, said: ‘The Bodleian Library at the University of Oxford is seeking to acquire the archive of William Henry Fox Talbot in order to ensure that scholars, artists, photographers and the general public can have access to the mass of papers, sketchbooks, photographs and artefacts that it contains to promote our understanding and appreciation of this great innovator, stimulate new art and other forms of creativity and broaden our understanding of the founder of a field of communication that has changed our world. I would like to add my support to their campaign to secure the Archive of William Henry Fox Talbot.’

The Bodleian Libraries have until the end of February to raise the remaining funds.  A series of public events is planned to support access to the Archive, including a major exhibition in 2017. Highlights from the Archive will also feature in the opening exhibition for the Weston Library, and in a number of smaller displays.