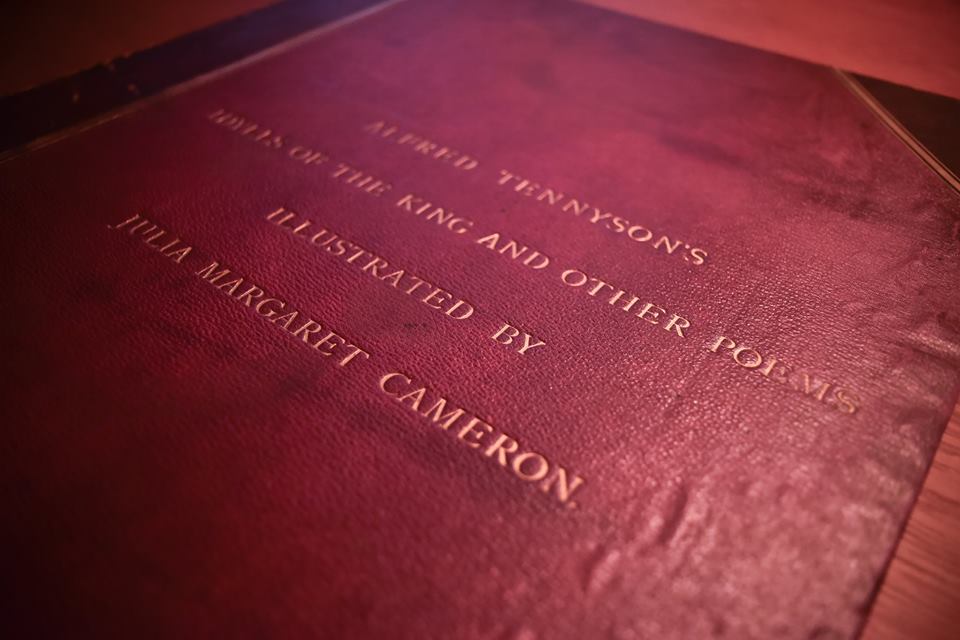 Poet Laureate, Alfred, Lord Tennyson’s Idylls of the King, and Other Poems, 1875, photographically illustrated by Julia Margaret Cameron, one of the most celebrated women in the history of photography, will take pride of place as part of the University’s extensive photographic collection. It is believed to be the only copy in a Scottish collection.

Tennyson is one of the most well-loved Victorian poets. Born in Lincoln in 1809, he published his first solo collection at 21 and his second collection in 1833. His second collection was met with such criticism that he did not publish again for ten years. His third collection, which included his seminal poem Ulysses, was received with more success.

In 1850 Tennyson published In Memoriam AHH. Dedicated to his late friend Arthur Hallam, it was a favourite of Queen Victoria, who said the book helped to comfort her after Prince Albert’sdeath. With Victoria’s patronage, Tennyson was acclaimed as the greatest poet of his day and was appointed Poet Laureate, succeeding William Wordsworth. Tennyson’s most famous works include Maud, The Charge of the Light Brigade and Crossing the Bar. Julia Margaret Cameron (1815-1879) is one of the most celebrated women in the history of photography. Best known for her powerful portraits, Cameron described her photographic subjects in the categories ‘Portraits’, ‘Madonna groups’, and ‘Fancy Subjects for Pictorial Effect’. Cameron was criticised for her unconventional techniques, but also celebrated for the beauty of her compositions and her conviction that photography was an art form.

Cameron’s close friendship with Tennyson resulted in the Poet Laureate choosing her services as a photographer to illustrate the proposed ‘people’s’ edition of Idylls of the King in 1874. Both lived in Freshwater on the Isle of Wight, Cameron moved there in 1860 having visited Tennyson’s estate on the island. In the event, only three of her photographs were used and those were from woodcut copies. Tennyson encouraged her to fund the publication of two large-format albums with the full-size photographs tipped in and excerpts from his poems lithographed from her handwriting. The first volume appeared in December 1874 with Volume II published in 1875. The University has purchased a copy of Volume II, which contains thirteen albumen prints including a frontispiece portrait of Tennyson and text for the poems all printed in a facsimile of Cameron’s hand. The copy belonged to Dr Rolf S. Schultze (1902–67), Kodak’s research librarian and curator of the Kodak Museum in the 1950s and 1960s. He was also the honorary librarian for the Royal Photographic Society in London.

The acquisition of Idylls of the King greatly strengthens the University’s reputation as an important centre for the study of the history of photography and enhances our collection of photographically-illustrated books. The addition to the Special Collections of Idylls of the Kingaugments the University’s Tennyson collection which includes first editions of Poems, Chiefly Lyrical and In Memoriam. The book has already been accessed by academics and there are exciting plans for using the book in research and teaching projects.

Gabriel Sewell, Head of Special Collections, University of St Andrews, said: “Idylls of the King is one of the most famous nineteenth-century collaborations between a poet and a photographer and a rare and invaluable source for the study of Tennyson’s poetry and of Victorian culture.

“St Andrews has one of the most significant collections of early photographic material in the UK. Idylls of the King is the jewel in the crown in our collection, cementing the University’s reputation as one of the foremost important centres for the study of the history of photography.”

The University of St Andrews Library is very grateful to have received the support of the Friends of the National Libraries to purchase a copy of Julia Margaret Cameron, Illustrations to Tennyson’s Idylls of the King, and Other Poems. Volume II (1875).