Campaign: the face of a photographer on the new £20 bank note (UPDATED) 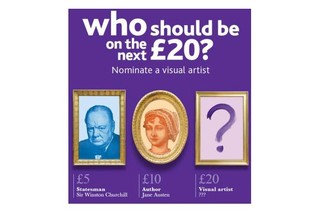 The Royal Photographic Society is encouraging everyone interested in photography to nominate an individual connected with photography to become the face of the new £20 banknote. The Governor of the Bank of England, Mark Carney, has announced that the next £20 note will celebrate Britain’s achievements in the visual arts and The RPS believes a UK photographer or photographic scientist is well-placed to be selected.

The BBC's Arts Correspondence Will Gompertz has come out as a supporter of Cameron. See here.

RPS Director-General said: "Photography has been the defining medium of the ninteenth, twentieth and twenty-first centuries and it's inconceivable that a photographer or someone connected with photography would not be chosen as the face of the new £20 banknote. If you own or use a camera or enjoy looking at photographs think about who you would like to see on the £20 note and nominate that person - and let the Society know by emailing director@rps.org so we can keep the UK photography community updated ".

Members of the public will have two months to nominate people of historic significance from the visual arts including photographers and filmmakers – whose work shaped British thought, innovation, leadership, values and society. The public can nominate characters from within the field of visual arts on the Bank’s website.

Nominations are required by 19 July 2015. Click here to make your own nomination and to learn more.

The public nomination programme is the first to be held under the Bank’s new character selection process which was put in place to ensure that the choice of characters for the Bank’s notes commanded broad respect and legitimacy. In line with principles announced in December 2013, the field of visual arts was chosen by a new Banknote Character Advisory Committee. Following the two month nominations period, the full Committee, with input from public focus groups, will draw up a shortlist of characters from which the Governor will make the final choice. The selected character will be announced during spring 2016. The new £20 note will be introduced into circulation in 3-5 years.

UPDATE: The Bank of England has issued a list of visual artists nominated by the public which can be seen here. It features a number of photographers. Please continue to visit the link above and continue to nominate photographers to ensure that they make the final short-list.

As for Julia Margaret Cameron, Professor Geraldine Johnson, from the History of Art Department at Oxford University, was a panellist discussing which artist should appear on a new £20 note following the announcement by the Bank of England that the public should offer suggestions.

You can find the programme online: http://www.bbc.co.uk/programmes/b05vfdzp
(Around 1:06 on the clock)